Where next for Matt Doherty?

Irish Football Fan TV > Uncategorized > Where next for Matt Doherty? 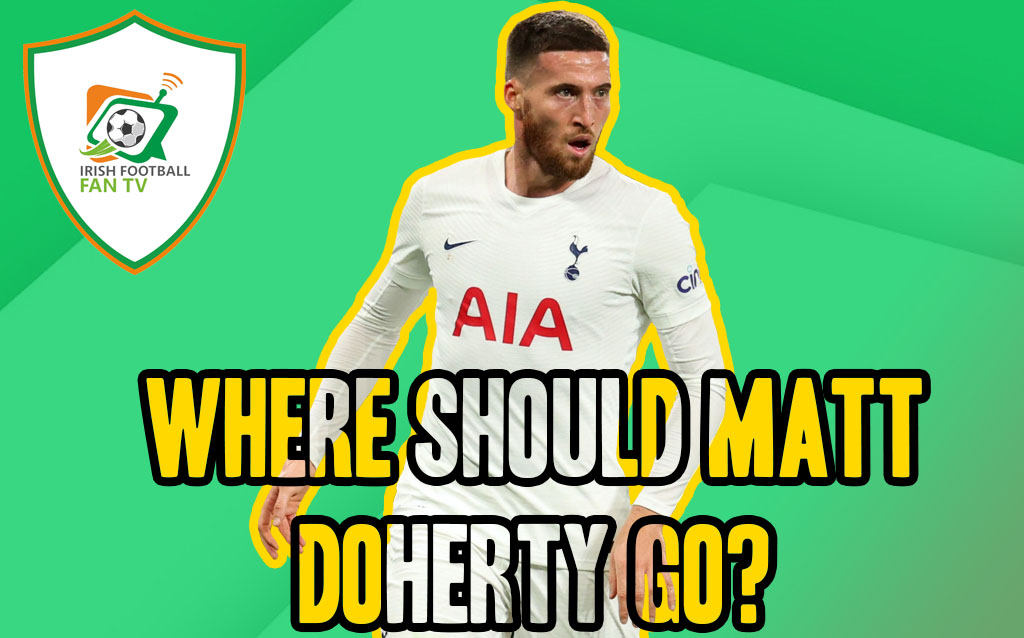 With reports coming out of the Tottenham Hotspur camp last week suggesting that Matt Doherty has been told that he can leave the club this January, we take a look at where could be a good fit for the now 29-year-old former Bohemians man. All stats are from FBref.com.

Doherty has undoubtedly played his best football when played as a right wing back in a back 5, chipping in with both goals and assists for Wolves and Ireland. At Spurs, he has never really been played in his favoured position. When he was signed, José Mourinho was the manager and he played an asymmetric 4-2-3-1 where the right full back had the freedom to be really attacking and the left back stayed back to form a back 3 when in possession.

It looks like, from the outside at least, that Spurs viewed Doherty as the man to replace Serge Aurier on the right hand side and there were no plans to replace the left back. This changed however when Spurs got the option to sign Sergio Reguilón. An attacking left back. This signing meant that Tottenham switched their system to accommodate him and both full backs were expected to contribute more defensively and this didn’t seem to suit Doherty who was used to having less defensive responsibility.

One of Doherty’s greatest strengths is his attacking positioning. Getting into the box to score himself, or, picking up positions in space in the final third and picking out passes. He has a tendency to cut inside when near the box to try and pick out a pass rather than cross the ball. These can all be seen in this chance for Doherty. He cuts inside, plays the ball to Harry Kane and then continues the run to the corner of the 6 yard box.

Doherty then receives the ball back and has a opportunity which is saved.

Rather differently to many other wing backs, he does not look to cross generally. In his final season at Wolves, he only attempted 1.21 crosses per game. This would make him a very interesting signing for teams and could see him fit into some teams really well.

Brighton are undoubtedly a team on the up under the guidance of the ever impressive Graham Potter. They play an attractive style with a focus on possession and getting shots close to the opposition goal where they have a better chance of scoring. Their average shot distance is 16.7 yards, one of the lowest in the league. They also play with a 5 man defence with wing backs. Doherty could slot in on the right hand side for Brighton in his natural position. When Brighton have possession in the final third then, Doherty could get into these positions and fashion chances for players with great attacking movement such as Maupay and Trossard. Brighton do struggle to finish chances so another player who scores goals would benefit the side. Especially with a talented crosser like Marc Cucurella on the opposite flank. His competition for places there would be Tariq Lamptey who, while a very promising talent, is young and has struggled with injuries. He does tend to cross the ball, 3.82 times per 90. So a different option on the right would help them out.

Like Brighton, Atalanta have a manager, Gian Piero Gasperini, with an almost cultlike following from football analysts. This comes down to his innovative and entertaining style which his Atalanta side play that involves intense man-to-man marking when pressing, not too dissimilar to Marcelo Bielsa’s Leeds. Atalanta have the most successful pressures per 90 (49.3) in the Serie A and the best success rate of pressures (33.9%). The right wing back for Atalanta, Hateboer, completes 3.59 tackles and interceptions per 90 which is very impressive. Doherty’s best season figure was 3.27 per 90 in 2018-19 for Wolves which isn’t too far below and in a system where this is significantly encouraged, why can’t Doherty have higher numbers in this area?

Attacking wise, Atalanta tend to try and work the ball into the box rather than crossing it, attempting only 9.95 crosses per 90, among the lowest in the Serie A. again, suiting Doherty. When in possession, Atalanta have a lot of rotations between players. Something which requires tremendously intelligent players. Something that Doherty undoubtedly is based on his attacking positioning and his versatility, having played at left wing back and even centre back for Ireland against Wales in the Nations League.

Another team on the continent and another team that could suit Matt Doherty. Frankfurt play 5 at the back system with wing backs under coach Oliver Glasner and are in need of a right wing back. Numerous players have been tried there this season, yet none have impressed particularly. Doherty could be the player to fill that role. A key reason why Doherty could be a huge attribute to the side is Serbian, Filip Kostić. Kostić plays on the left, the opposite side to where Doherty would play, and is one of the best crossers in Europe. He has averaged 6.89 crosses per 90 and completed 1.66 of them( the 2nd most in the 5 big European leagues of players who have completed more than 5 90s). Kostić is very good at beating players and getting crosses into the box. Doherty could turn some of these crosses into goals with his movement and aerial prowess which we saw at Wolves.

In defence, Frankfurt also like to press and win the ball back higher up the pitch. They have applied the most pressures in the middle and attacking thirds in the Bundesliga. So Doherty would have his work cut out in winning the ball back but like mentioned previously, under a good coach like Glasner where this is encouraged, why can’t he keep up?

No rumours have popped up yet surrounding Matt Doherty’s next club with just a few days until the January transfer window opens. However reports in the UK have suggested that Antonio Conte wants a new attacking right wing back at Spurs which suggests that Doherty’s time in North London is over.