Where could we see Festy Ebosele for Ireland?

Irish Football Fan TV > Uncategorized > Where could we see Festy Ebosele for Ireland? 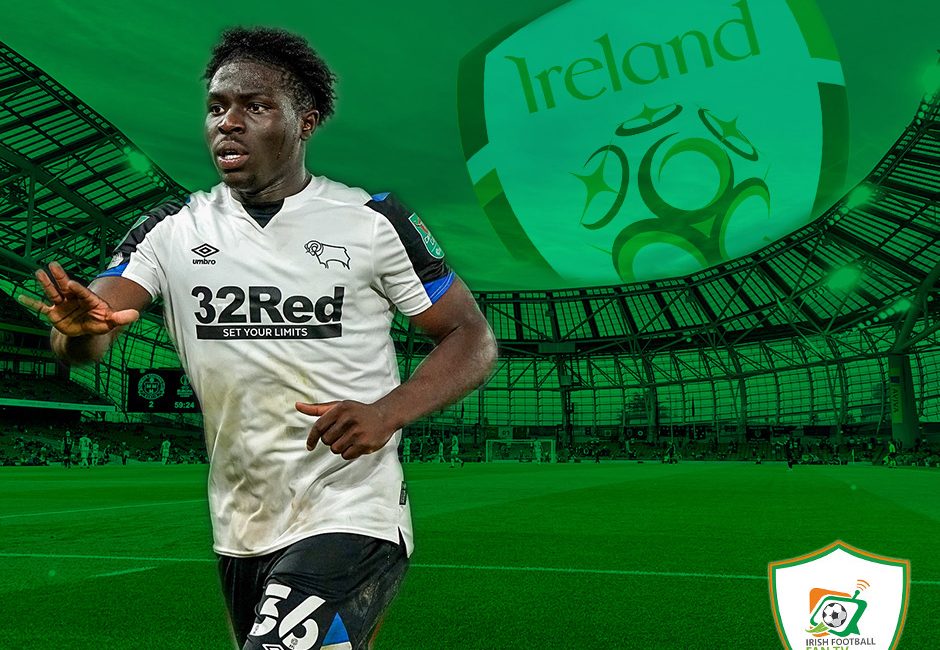 19-year-old Festy Ebosele hasn’t even been named in a senior Irish squad yet, but the Enniscorthy man looks to be a hugely important player for the boys in green in the future. Ebosele has featured mainly on the right this season both in midfield and as a wing back, performing well in both. Derby manager Wayne Rooney has been very complimentary of the teenager, calling him a “Huge Talent” amid reported interest from Udinese in Italy.

Ebosele has registered 2 goals and 1 assist in the championship, but he offers so much to the side than just goals and assists. For example, in Derby’s crucial win against relegation rivals Peterborough United, it was Ebosele’s dribble that lead to foul by Hayden Coulsen which resulted in his second yellow (He has been fouled 1.81 times per 90 throughout the season). It is this dribbling ability that makes him arguably Ireland’s most exciting player at the moment. His assist against Sheffield United in January showcased his direct running and frightening pace. He starts off by winning 2 ground duels which give his side the ball back deep inside their own half.

Before he motors past the covering Sheffield United defenders leaving them rather comically taking each other out.

When he gets to the edge of the box, it would be easy for a young player like himself to get carried away and try to finish themselves. However, he shows the composure to slide a pass out to the left hand side where Derby have a free man.

The player on the left then tries to pass the ball to Tom Lawrence who is the player on the right, but Ebosele gets a touch on the ball which grants him the deserved assist. Even without this touch however, Ebosele was undoubtedly the major man in this goal.

Ebosele had his best performance of the season in a 3-1 win against Hull City where he scored one, made another and was a constant threat to Hull’s backline throughout. For Derby’s second goal, Ebosele received the ball wide on the right hand side, one on one with the Hull defender.

Ebosele then explodes past the defender and gets to the byline to play a ball across. This ball is parried by the keeper but the Tom Lawrence then finishes from the follow up. This goal is a prime example of Ebosele’s great work not being rewarded with a goal or assist for himself, but does result in a goal for the team. Being able to get past a defender from a standing start like Ebosele did, is incredibly difficult to do and only a small number of players can do this with the ease Ebosele did.

Ebosele did score in this game too with a emphatic finish into the bottom corner after using his pace to get in behind the Hull defence.

So having looked at Ebosele’s strengths, where would he perform best for Ireland in Stephen Kenny’s system? Would he fit in best as the wing back on the right? Or would he be better suited to the right behind the striker?

Matt Doherty has generally been the wing back on that side and that position is crucial to the way that Ireland build out from the back. So whoever is playing here has to be adept in short quick passing like Doherty has been. However, once Ireland do progress past the opponents press, Doherty has tended to get quite a lot of space. Ebosele in this space could be lethal as he will be able to run at the opposition defence causing problems directly for himself, or by opening up space for others by dragging defender over to him.

At wing back, he would have more defensive responsibility however, defensively, Ebosele is also extremely capable, as he has proved in his numerous appearances there this season. He has made 2.69 tackles and interceptions per 90 this season. In fact, against West Brom at the end of December, Wayne Rooney switched Ebosele from the right of defence over to the left to defend against the dangerous Grady Diangana and attacking full back Darnell Furlong. Once switching, he used his pace to make a goal saving recovery tackle on Furlong and Diangana was subbed off after about an hour. Derby went on to win this game.

The other option for Ebosele is to play on the right behind the striker. As a right footed player, he will most likely to drift wide when played in this position which isn’t necessarily an issue as Doherty, who would presumably be the wing back in this scenario, does like to move inside more so than a lot of other wing backs. Doherty also makes underlapping runs which would be facilitated by Ebosele drifting wide.

Opposition defences also know how dangerous Ebosele can be and him drifting wide would draw defenders leaving more space for Doherty or one of the midfielders to play passes into the striker. This is from the game against Portugal at home. Chiedozie Ogbene staying wide here opens up space for Doherty, who has the ball here, to run into.

In this same game, especially in the first half, when Ireland broke, the front 3 had a lot of space to run into. Ebosele in this scenario could be devastating.

It is important to remember that Ebosele is only 19 still and it is highly likely that he will be named in the under-21 squad this month for their important qualifier against Sweden. However there could be no complaints if he was to be called into Kenny’s squad and if he is, it will be very interesting to see where Kenny would look to utilise him, looking to take advantage of his strengths.