Under the Radar: A closer look at Ireland’s representatives in the Premier League 2 (Part Two)

Irish Football Fan TV > Highlights > Under the Radar: A closer look at Ireland’s representatives in the Premier League 2 (Part Two) 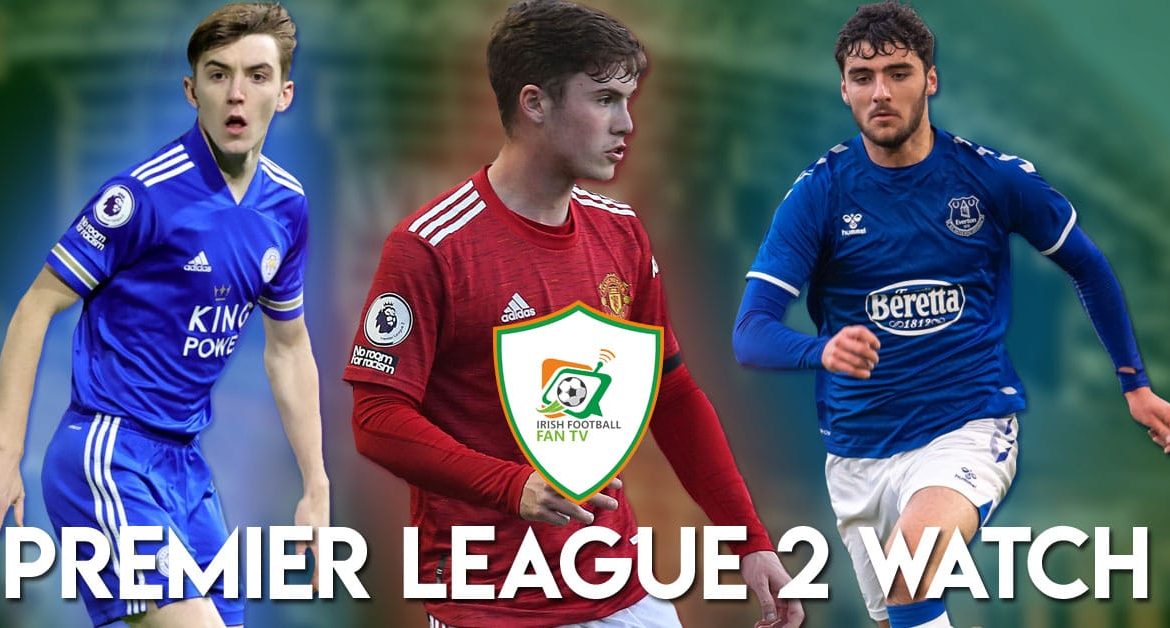 In Part Two of ‘Under the Radar’, we take a look at Ireland’s current crop of youngsters in Division 1 of the Premier League 2. This division boasts some of the big hitters of English football, including both Manchester clubs, Liverpool and Chelsea. A total of 27 Irish (or Irish eligible) players have featured in the U-23’s top league and we’re going to focus on three players in particular and see how they have performed during the 2020/21 campaign.

If you missed Part One, you can catch up here.

Shane Flynn may be a name that most Ireland fans have grown familiar with over the past year. It has been a season to remember for the young defender. From being picked for Leicester City’s Europa League squads and making the bench for the first time in a Premier League fixture, to signing a new contract with the club and earning his first Ireland U-21 call-up.

Flynn had stints at both St Joseph’s Boys and Bray Wanderers before signing for the Foxes in 2018. Since then his career in England has been on a steady incline. After an impressive two seasons in the U-18 set-up, the 19-year-old was promoted to the U-23 squad at the beginning of this season and has become a prominent feature in Leicester’s U-23 team, amassing a total of 23 appearances in all competitions, scoring one goal in the EFL Cup as well as notching up five assists from full-back. Flynn is so highly thought of at the club that he was handed the captain’s armband for recent games against Arsenal and Liverpool.

Leicester manager Brendan Rodgers can also be added to the list of Shane Flynn’s admirers. The left-back was included in the final three Europa League matchday squads — including the two-legged knockout tie against Slavia Prague — and also made his first Premier League squad in an away victory over Brighton back in March. Jim Crawford honoured Flynn with his first U-21 call-up in March too, however the youngster still awaits his debut at that level having watched the Wales game from the bench.

A successful season at U-23 level has given Flynn the opportunity to mix with the best at Leicester City. He has gotten a taste for first team action and that is all he will need as he begins to look towards next season and beyond. Evolving from ‘on the cusp’ to ‘on the field’ will be the next aim for the 19-year-old.

One viewing of Charlie McCann’s highlight reel from Manchester United’s clash with Chelsea and you can tell that the Irish midfielder is a talent. It’s not just the two assists, but it’s the way McCann looks to progress the play every time he gets on the ball, exuding a certain air of composure and confidence.

The young midfielder signed for Manchester United’s academy from Coventry City back in 2018. Similar to his compatriot Shane Flynn, McCann was promoted to the U-23 side at the beginning of this season after a productive period with the U-18’s. Although his natural position is defensive to an extent — sitting in a two man pivot at the heart of the midfield — he still managed to contribute four goals (including a long range strike away to Everton and a brace against Southampton B) and three assists from 17 league appearances this campaign, thus demonstrating his creative capabilities.

McCann, who was born in England, initially represented them at U-16 level, before switching his allegiance to the Republic of Ireland and since then he has made a total of seven appearances at both U-17 and U-18 levels. Despite still being only 19 years old and yet to have made his senior debut, the midfielder may have felt he did enough this season in the Premier League 2 to warrant a spot in Jim Crawford’s U-21 squad. Nevertheless, if he can continue to develop at this current rate, it won’t be long before he is a permanent fixture within the Ireland set-ups.

Everton striker Tom Cannon’s duties have been split between the club’s U-18 and U-23 sides this season, with both coaches looking to get the most out of the 18-year-old. Cannon averaged more than a goal per game last season for Everton’s U-18’s, form that deservedly merited him a chance to prove himself at a higher level. This season, the young striker has scored nine goals as he continues his development with the U-18’s while also chipping in with two goals and one assist in the Premier League 2.

Cannon also has two underage Ireland caps to his name, including a 13-0 victory over Gibraltar for the U-19’s back in 2019. He scored one goal that day along with claiming three assists and started alongside the likes of Andrew Omobamidele, Jamie Bowden and Lewis Richards. The Everton striker missed out on a U-19 international competition this season due to COVID-19 restrictions but U-21 boss Crawford wanted to make it known that Cannon was in his thoughts.

He was drafted into the U-21 training camp ahead of the Wales clash in March, together with Festy Ebosele, and left an impression on the manager: “Tom showed up well playing as a striker in the 11-v-11 game, so that’s one thing that’s come out of this camp, and those two have staked a claim for future squads”.

The progress that the young striker has made at club and international level surely bodes well for his future and he will definitely be one to keep an eye in the coming years.

Any cookies that may not be particularly necessary for the website to function and is used specifically to collect user personal data via analytics, ads, other embedded contents are termed as non-necessary cookies. It is mandatory to procure user consent prior to running these cookies on your website.