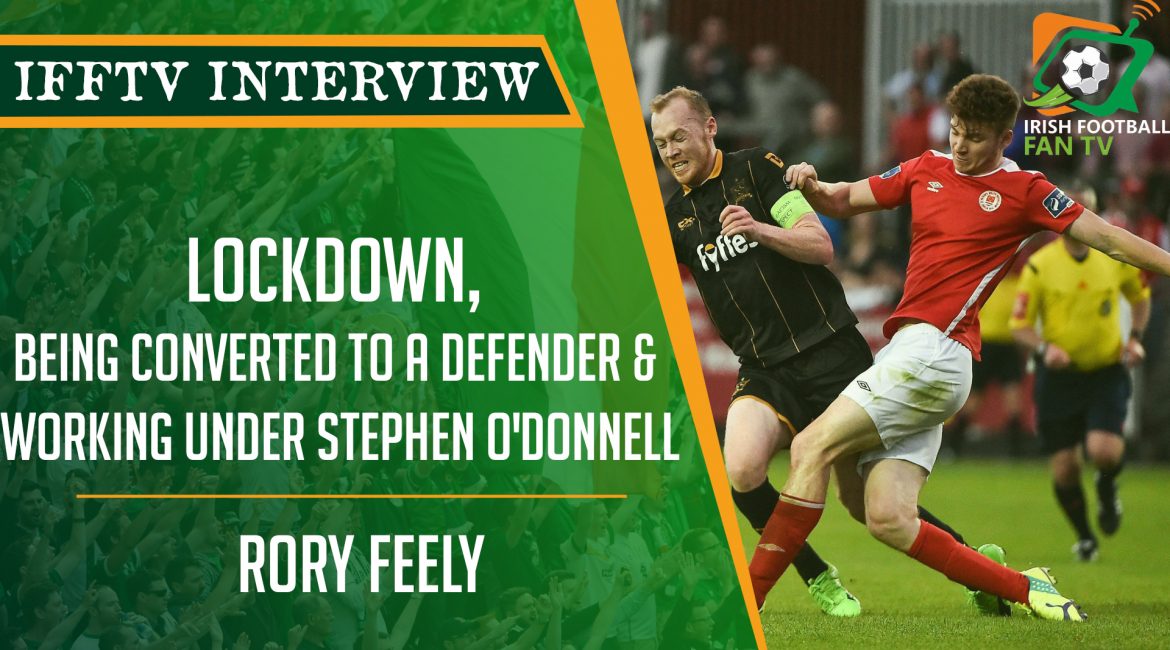 Like most Footballers across the World, League of Ireland players are uncertain as to when they will return to training and get back playing games. COVID 19 has been a few things into prospect and the health of people is main concern at moment. Football will return when there less risk to people’s health. Until then Footballers find themselves with more time on their hands. One of those is St. Patrick’s Athletic player Rory Feely, who speak to our man Gerard Browne last week.

One of the main themes of this lockdown is for people to develop a new talent or rediscover a talent they once had. For Rory, it’s been music and Gaming. “I just tend to pick up what’s around me. I started playing the guitar. I got backing into gaming. I’d play against a couple of friends and a few players on the Pat’s team are quite good, mainly Shane Griffin and Ronan Hale”, he explained.

The right back has also been playing his part on St. Pat’s socials and participates in the club’s podcast. “The fact you can have 3 players on at the one time is huge and makes the conversion flow easier. We are so close as a team, so the Podcast is a great idea”. Rory sees benefits of the podcast for the club, the players and the fans. “It’s a great chance for the club to make some money and for the players to talk to each other instead of texting. It’s good for the fans to see what we can get up to. We aren’t just Footballers and there another side to us”, he added.

The 23-year-old was quick to turn down the thought of starting his own podcast when he retires and said it will be teaching, he will turn to when he hangs up his boots. Rory graduated from DCU last November with a degree in Physical Education and Mathematics.

While it could be months before the League of Ireland returns, players still must keep fit and training programmes must continue. Both manager Stephen O’Donnell and the Strength & Conditioning coaches have been in regular contact with the players.

“He (Stepehen O’Donnell) been in contact with us 3 or 4 times a week. We been using an app called Strava. Our S&C coach has giving different targets to hit on that. In terms of gym, we had a few zoom sessions with the S&C coaches being the main speaker in those. Other than that, it is up to yourself to do what extra you can to stay fit”, he outlined.

One-way Rory is getting extra training is a sibling rivalry with his older brother Kevin. An ex League of Ireland player with Bohemians, Kevin is currently a Gaelic Footballer with the Kildare Senior team. The Feely brothers have their own competition ongoing.

“We are doing a challenge between the two of us on who can get the fastest time, but he is living with his girlfriend down the road. He still keeps an eye on my times and tells me when he beats them, which is most of the time,” he joked.

Rory was born in Brussels, Belgium. His Father was working with Kerry Group over there before moving to Tramore, Co. Waterford when he was young. This where Rory interest in Football first started as he was a ball boy at the RSC.

“I said went I signed for Waterford, the last time I was in the RSC, I was a ball boy. It was kind of cool going from being a ball boy to playing there 9 or 10 years later and obviously a big step up. The crowds were big back then too, so for a 9 years old to see a couple of thousand at a Football match was surreal”, he said.

It was also when Rory moved to Tramore that he also started playing Football. He played for the local team, Tramore AFC and later for Athy Town (his family moved to Athy). It wasn’t until he was 17 years old and at Crumlin United that he caught the attention of St. Pat’s.

“I was playing for Crumlin at the time but still living in Athy. I think Cyril and Richie were the founder of the St. Pat’s U-19s. They came up to me after a match with Crumlin and said they be interested in meeting me and Liam (Buckley) be interested in meeting me too. I meet them a few weeks later and I agreed they had the best hopes for me as a Footballer, what I wanted to do, and I signed with them after that”, he explained.

“That was probably the best shape I was in, the fittest I ever been. Your training every day and the multeity of sports can only benefit you with technique. They were a couple of great years and some successful days. I was fortunate enough to win the League with Pat’s and Leinster with Kildare in the same year, which was amazing. To win with DCU was great”, but after that game he decided to focus solely on Football.

2016 was the year Rory started to make an impression on the St. Pat’s first team. He made his Senior debut vs Athlone Town in October 2014, but he stepped it another level in 2016. He made 17 appearances and 13 of those coming in the League, as St. Pat’s won the EA Sports Cup.

Not only was it a step up in level but a change in position. He played on the right wing for the U-19s but that was about to change. “At the end of the 2015 season, we had a game against the Senior. We were short a few players and had mainly midfielders and strikers. I was asked to play centre back and mark Christy Fagan”. He did well on the veteran striker, and it didn’t go unnoticed. “Liam Buckley came up to me afterwards and said if you want to make a living at centre back, we got a place for you. I said I give it a go and that’s pretty much how it took off”, he continued.

The converted centre back went on to make 27 appearances in the 2017 season, but it was a struggle for the Inchicore club. They only retained their Premier Division status on the final day of the season. It was very much a season of transition. “A lot of the squad started moving on to England or stronger clubs like Dundalk or Cork. It left Liam with a young squad and a few older players”; he added.

“It was at the end of the 2017 season, when I realised there wasn’t much else left to achieve. I wasn’t being offered a new contract and that’s how the move to Waterford came about”. Waterford were a club on the rise. They coasted to the First Division title in 2017 and started the 2018 Premier Division winning 3 of their 4 opening games and never looked back from there.

“It was the ideal season you could wish for as a young player. Waterford had momentum behind, a huge fan base and Alan Reynolds made some great signings. He brought in Bastien Hery and Ismahil Akinade. There was huge quality in the team, and we gelled together for a great year”, he commented.

It really was the ideal season for Rory. He won Young Player of the Season and Waterford finished 4th. That meant European Football but that was taken away from them due to off the field reasons in April 2019. “The whole Europe thing did hit us and hurt team morale. We were looking to build on from the previous year”, he mentioned. Waterford never fully recovered from that European setback and finished 6th.

2019 did see Rory status at Waterford grow. He was given the captains armband and was then named Player of the Season. Rory described these acknowledgments as a huge help to his

career. There was also another new position for him to adapt. “Damien Delaney and Kenny Browne were the centre backs and I wasn’t going to kick one of them out”, he jokes.

After 2 years in the South-East, Rory felt it was time for a move. After meeting a few clubs, it was when he meet St. Pat’s manager Stephen O’Donnell, Rory knew he found the club he wanted to sign for.

“The drive and ambitious Stephen had, you see could it in the way he was saying and that really attracted me. There were players still there from my first spell – Darragh Markey, Jamie Lennon, Ian Bermingham and Brendan Clarke. That was going to make it a quick transition”, he outlined.

“He was a quality player and has a wealth of knowledge. The coaching staff he was bringing were top class too. He is driven and ambitious and you can see he is getting that into the team”, he added.

It’s been a mixed start to the season for St. Pat’s with 2 wins and 2 loses. Rory has featured in 3 games, all at right back and knows there are areas to improve on. “Overall, I’m happy enough with the start of the season and I say the rest of the players are. We be looking to get a few more goals instead of scraping for draws or holding onto the lead towards the end”, he acknowledged.

There is a lot of talk as to when the League is going to resume and whether it will be behind closed doors. The right back wouldn’t be a big fan of playing behind closed doors and fears clubs will struggle to make profits. Whenever the season does resume, he would like a few friendlies to get match fitness back.

“There is no training for match fitness other then playing matches. If they do find a date for the League to restart, there must be a few friendlies, whether its between Premier Division and First Division clubs. Nobody going to get their match fitness back from running around a park”, he concluded.