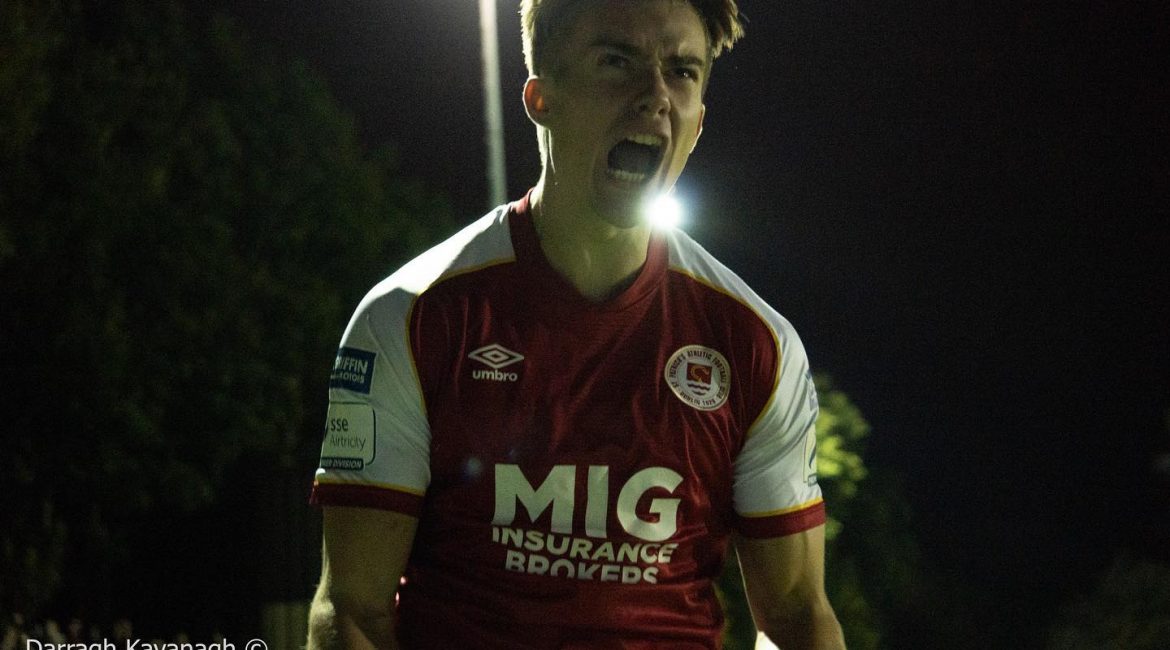 A perfect hat-trick by Matty Smith has secured European football for St Pats – ending three years without playing competitively on the continent – as the Inchicore club ran comprehensive winners at a rainy Bishopgate.

The scoreline doesn’t tell the full story, as Longford were the better side at 0-0 and only a combination of fine goalkeeping by Viteslav Jaros and poor shooting prevented them from having the advantage.

Both sides rang the changes for this encounter. The hosts made four while the visitors brought in half-a-dozen replacements, and it was the home charges that adapted quickest.

The Midlanders had the game’s opening chance in the 4th minute. A corner on the left by Aodh Dervin found the head of Aaron O’Driscoll, but a deflection took away any pace and it was a routine save for Jaros.

Moments later, they wasted a good opening down the opposite flank. Chris Forrester was deprived of the ball for Pats, Karl Chambers realised Joe Manley in an ocean of space, but a poor first touch by the striker led to him overcooking a cross across the goal.

Pats were very sloppy in possession early on, but they almost broke the deadlock in the 11th minute through the ambitious Jason McClelland, but it was the side netting the ball brushed instead of past Lee Steacy.

Daire Doyle’s men were getting good joy down their left and a peach of a delivery by Paddy Kirk picked out an unmarked Dean Williams in the 19th minute, but Jaros read it all the way and cleared away safely for a corner.

The Czech Republic underage International was once to thank for the Dubliners not falling behind six minutes later. Manley’s through ball slipped in Williams, who looked to have done enough, but a full-stretch Jaros ensured the game remained goalless.

Completely against the run of play, it was the Saints who scored just shy of the half-hour mark, thanks to a smashing volley from Smith inside the box. After a bit of scramble, a clever ball by Forrester gave Smith room and he produced a finish to remember.

The home faithful were annoyed for seven minutes when strong appeals for a penalty were turned by referee Ray Matthews. Paddy Barrett made contact with Williams, but it was deemed to be legal.

Just before Matthews blew for half time, Pats doubled their lead, with Smith’s second of the night, this time with his head from Robbie Benson’s corner. Just before that Dean Zambra did his best to keep it 1-0 when he cleared James Abankwah’s strike off the line, but the Scotsman ensured more misery for the bottom outfit.

Just like the first half, Longford started the second brighter and got themselves back into the contest six minutes after the restart, but in controversial circumstances. Their main attacker Williams showed great composure after being set up by midfielder Dervin. However replays showed Williams was offside, but the linesman flag remained by his side.

The contest went very quiet after that, with neither side creating any opportunities. It took until the 76th minutes before the next incident of note when Ian Bermingham blocked Aaron Robinson’s shot. The home dugout were up in hands that a spot-kick wasn’t awarded for handball, but referee Matthews showed no interest.

Substitute Alfie Lewis confirmed the three points would be travelling back to the capital when he fired home from the edge of the box. Darragh Burns had the initial cross, Smith with a backheel and Lewis left Steacy powerless to stop further damage.

In additional time Smith racked up the activities with his hat trick. Jamie Lennon was at the heart of the move before Burns unselfishly put it on a place for the winger. The final whistle went soon after with the away end dreaming of the trips they can book next summer.