Serbia vs Republic of Ireland: Three Serbian players to watch out for on Wednesday night 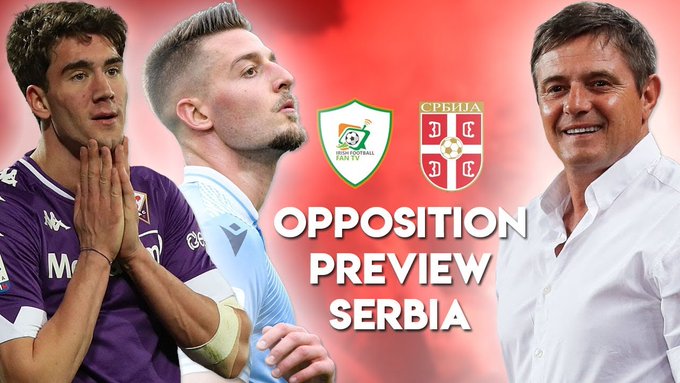 The Serbian national team boast a squad packed with top-class European players. Many will be familiar with the likes of Dušan Tadić, previously of Southampton and now at Ajax, Aleksandar Mitrović at Fulham, and Real Madrid striker Luka Jović who is on loan at Eintracht Frankfurt in the Bundesliga.

However, Milos from the Serbian Football Show and Serbian Football twitter account picked out three alternative players who could cause Ireland problems when he sat down to speak to Paul and Gary from IFFTV.

Dušan Vlahović has thrived this season in the purple of Fiorentina, scoring 12 goals in 24 starts for the Serie A club. Current Fiorentina boss Cesare Prandelli has a habit of getting the best out of the strikers he works with, and the same trend seems to be happening with Vlahović who has scored 11 of his 12 goals under Prandelli since his arrival at club back in November. The Italian manager previously worked with the likes of Adrian Mutu, Alberto Gilardino and Adriano during the peak of their careers in the Italian league.

The 21-year-old is a powerful striker, standing at 6 ft 3 inches tall, and therefore comparisons to Milan and Sweden striker Zlatan Ibrahimović are hard to avoid. Vlahović definitely doesn’t have an issue with said comparisons though. In an interview last year with TuttoMercatoWeb, he confessed that the Swede is his biggest idol and was quickest to nab Ibrahimović’s shirt after last weekend’s game between the two sides.

It is definitely a season to remember so far for the striker who was struggling to find his feet before the arrival of Prandelli. Since then, the manager’s faith in him has been repaid and Vlahović is now the form striker heading into the international break. A hat-trick against Benevento followed by an assist for Franck Ribéry in Fiorentina’s last game against Milan is certainly the sign of a man playing with confidence.

Sergej Milinković-Savić finds himself in good company at the top of the assists chart in Serie A this season. The Lazio midfielder is on eight for the campaign, the same number as Romelu Lukaku, Henrikh Mkhitaryan and Álvaro Morata. Add seven goals to the equation and you can see why the central midfielder has attracted the attention of several European sides.

Milinković-Savić may be described as a combative midfielder with an eye for goal who dominates on the ground and in the air due to his size and physicality. The 26-year-old is also no stranger to a long-range finish which Lazio fans are all too familiar with, but it was in the box where he did the most damage in Serbia’s Euro 2020 first play-off win against Norway last year.

A brace from the midfielder back in October’s play-off demonstrated his attacking ability, and he has not slowed down since, enjoying one of his finest and most prolific seasons at Lazio since his move there back in 2015.

Another Serbian who is known for being a provider of goals is Eintracht Frankfurt winger Filip Kostić. In the Bundesliga, the 28-year-old is second in the standings on 10 assists, behind Bayern Munich attacker Thomas Muller who leads the way. Kostić is the most experienced out of the three payers mentioned, with 35 caps to his name at international level.

Kostić possesses an impressive attacking record at club level, contributing an average of 15 combined goals and assists in his last three seasons with Frankfurt (including the current campaign). Similar to his compatriots Vlahović and Milinković-Savić, he has hit a spot of form in the build-up to Serbia’s clash with Ireland. The Serbian has scored four and assisted a further eight goals in his last nine appearances for his club side.

Crossing is a skill that the winger has mastered and one that may be useful in the upcoming international fixtures, particularly if he has two teammates to aim for who provide an aerial threat like Vlahović and Milinković-Savić do, and that’s before you add Aleksandar Mitrović into the mix. This ability to instigate goal scoring opportunities for his teammates recently earned Kostić the reputation of one of the most creative players in Europe’s top five leagues in terms of chances created, with only Jadon Sancho ahead of him in the rankings at the beginning of this month.

The Republic of Ireland take on Serbia at 7.45pm on Wednesday 24th in the first game of their 2022 World Cup qualifying campaign.

You can catch the full interview with Milos from The Serbian Football Show below.