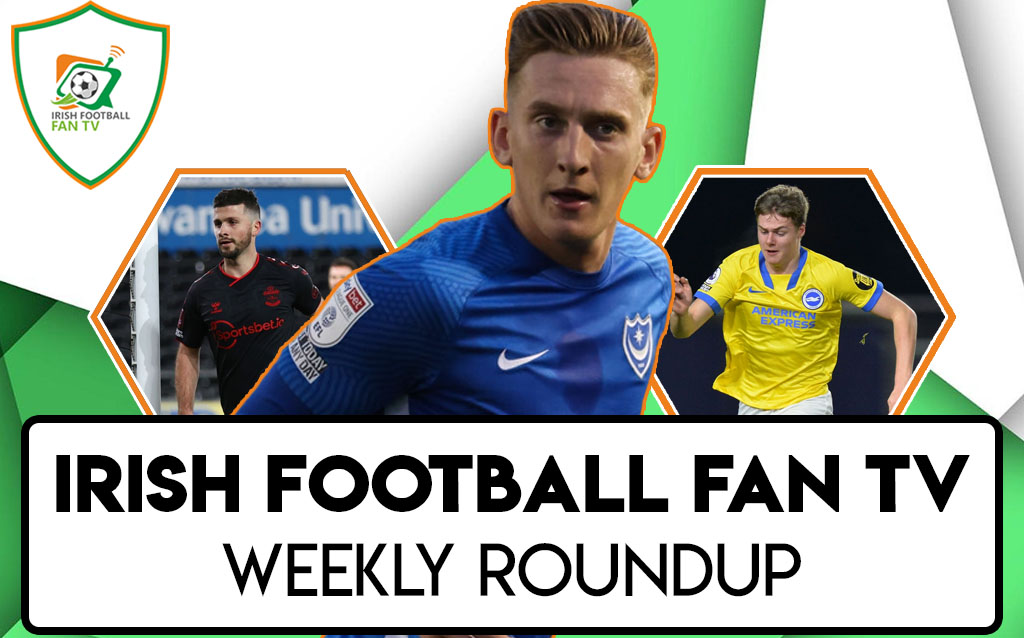 Man City and Swindon Town kicked off the weekend’s FA Cup action on Friday night. Fresh from his loan switch from Crystal Palace, Jake O’Brien watched from the bench as his new club suffered a 4-1 defeat at the hands of the Premier League champions.

Portsmouth nicked a late win away to Exeter City thanks to a brace from Ronan Curtis. The Irish winger scored in the 89th and 93rd minute to give his team the win and in doing so became Pompey’s all-time record goalscorer this century, overtaking former striker Yakubu in the rankings. A tremendous feat for the 25-year-old. Marcus Harness set up the opening goal in the 3-2 victory.

From our Irish-biased perspective, those most exciting tie of the FA Cup third round was at the Hawthorns so that is where we will start. Callum Robinson squeezed the ball home just after the half-time interval to give West Brom the lead over Brighton. However, the challenge of holding onto that lead became a lot more difficult when they were reduced to ten men with over 20 minutes left to play.

Then it was time for Evan Ferguson to make his second first-team appearance for the Premier League side. Within five minutes, the 17-year-old forward touched the ball into the path of Jakub Moder who levelled the tie up. Minutes later Ferguson nearly had his first goal for the club as Shane Duffy’s long ball landed at his feet and his lobbed effort narrowly missed the goal. He went even closer in extra-time, this time seeing his effort hit the net only to be chalked off for offside. Needless to say the youngster made an impact on the tie and Brighton progressed to the next round winning 2-1 in the end.

Shane Long netted his first goal since scoring for Bournemouth back in February 2021. The striker has made just six appearance this season for Southampton yet that didn’t stop him making his mark on the game when he was introduced in the 77th minute against Swansea. Southampton went one goal down in extra-time before Long set up the equalizer before scoring the winner minutes later, ensuring his team stay in the competition. Michael Obafemi started for the home side against his old club, making his first appearance since November.

Peterborough United’s Sammie Szmodics’s also contributed to two goals in a 2-1 win over League Two side Bristol Rovers. The midfielder scored their first in the first-half with a well-timed run followed by a composed finish into an empty net. Szmodics went on to set up the winning goal with a clever layoff in the second-half.

Elsewhere, former Ireland U-21 international Joe Quigley scored Yeovil Town’s only goal of the game in a 3-1 defeat to Bouremouth. Gavin Kilkenny played the full ninety minutes for the visitors, while Robbie Brady was a second-half substitute.

Will Keane got an assist for Wigan in an impressive 3-2 victory over the in-form Blackburn Rovers. Meanwhile Stephen Quinn also grabbed an assist, however his side Mansfield Town were on the wrong end of a 3-2 scoreline in their tie with Middlesbrough (as a result of a John-Joe O’Toole 95th minute own goal unfortunately…). Aaron Connolly still awaits his debut for the Championship side.

We can’t move on without mentioning Wes Hoolahan’s Cambridge United and their win over Newcastle United which provided the customary ‘cup upset’ that every fan wants to see. Hoolahan played the final half hour of the remarkable win as recently promoted (to League One) Cambridge knocked out Premier League side (maybe not for much longer) Newcastle United.

Other notable Irish representatives to make into into the next round of the FA Cup include Seamus Coleman (Everton), Jimmy Dunne (QPR), Gavan Holohan (Hartlepool United) and Jordan Shipley (Coventry City).

It’s been a while since we’ve heard of Anthony Scully’s name in the headlines. In fact his last goal for Lincoln City came back at the very beginning of October. To be the fair to the forward he has spent most of his time since then in the treatment room and started just his second league game in well over a month on Saturday. It’s no coincidence either that Lincoln have struggled without their main man and picked up their first win since October with the help of Scully who scored on his return with a terrific finish.

Tranmere Rovers made it six league wins on the bounce on Saturday as they beat Scunthorpe United by four goals to nil. Former Ireland youth international Sam Foley scored the third goal of the game while current Ireland U-21 captain Lee O’Connor excelled in a midfield role that he has been playing in at club level despite his loyalty to the full-back position at international level.

Morecambe’s Anthony O’Connor was the standout name in Sunday’s FA Cup action. The Irishman gave his side a shock lead away to Spurs when he got his foot on the end of a corner in the 33rd minute to make it 1-0. Spurs, with Matt Doherty playing wing-back, scored three late goals to rain on Morecambe’s parade and subsequently progress to the next round of the competition.

With Alisson still out with COVID, Caoimhín Kelleher started his second successive game in goal for Liverpool following on from an superb display against Chelsea in the league. Sunday’s game against Shrewsbury Town was a quieter day at the office for the Corkman as the Premier League side eased to a 4-1 victory. Some welcomed first-team action for Kelleher but former Ireland goalkeeper Shay Given still believes he needs to be playing more regularly.

The last bit of Irish action came in the game between Cardiff City and Preston where James Collins assisted an extra-time winner for the home side.

While Troy Parrott has been in and out of MK Dons’ starting eleven recently, Warren O’Hora has been a mainstay. The defender has started every game this season for the Dons and played his part in keeping their seventh clean sheet of the campaign in a 1-0 win over Wimbledon on Tuesday night.

Three Irish lads were involved in the clash between Mansfield Town and Swindon Town in League Two on Tuesday. Jake O’Brien made his debut for Swindon and contributed with a late assist however Mansfield came out on top, winning 3-2 which included a Stephen McLaughlin penalty in the 31st minute.

We don’t usually show clips of assists in the Weekly Round-up but this week there has to be an exception for Wes Hoolahan’s glorious outside-of-the-foot assist for Harvey Knibbs in the EFL Trophy. On a high after beating Newcastle, Cambridge hosted a Portsmouth side — with Ronan Curtis starting up top — and came away with a 2-1 victory.

The only other fixture in the competition on Tuesday night was between Arsenal U-21’s and Chelsea U-21’s. Irish centre-half Mazeed Ogungbo set up the second goal of the game for Arsenal. Jack Henry-Francis also started in midfield for the Gunners whilst George Nunn was a second-half substitute for Chelsea. The game finished 4-1 to Arsenal.

Adam Idah made his 50th club appearance for Norwich City on Wednesday night as he started his third game of the league season in a 2-0 defeat to West Ham. The Ireland international striker played in a more deeper role behind Teemu Pukki in the defeat and impressed the Norwich fans with his performance, although his manager Dean Smith is of the opinion that still needs to work on some parts of his game.

“There were a couple of opportunities in the first half where, I’ve got an old saying, ‘don’t make a good chance better’, and I felt that he turned down a couple of good opportunities where he could have had a shot.”