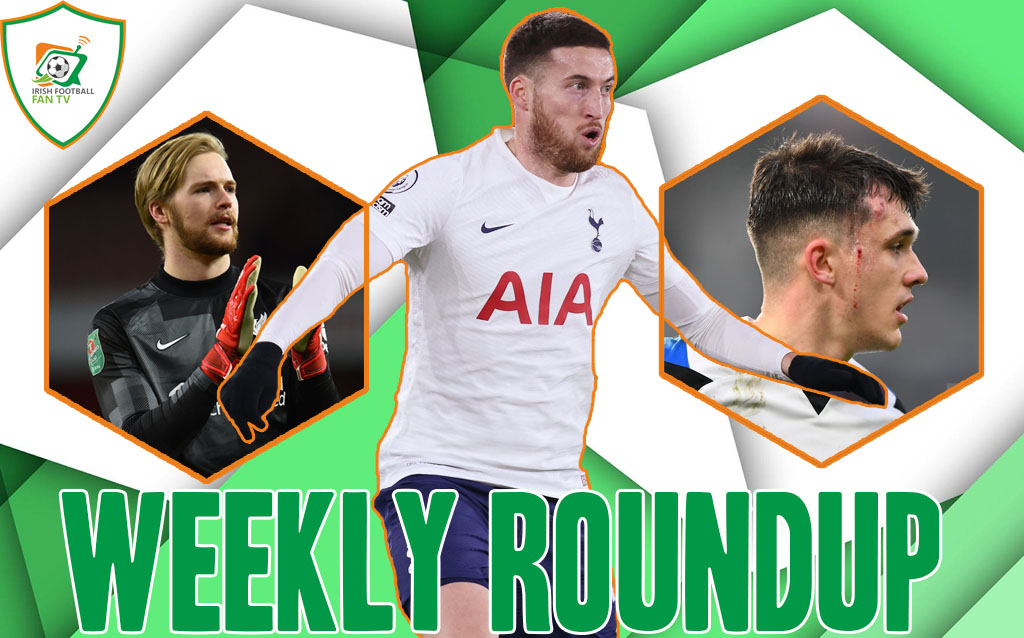 Only two Irish players took to the pitch in the Premier League on Saturday and both featured in the game between Norwich City and Everton. A loose pass from Seamus Coleman in the Norwich half was intercepted by Brandon Williams who instigated a counter-attack for the home side, flying down the left before slipping in Adam Idah. The striker stabbed the ball home to mark his first Premier League goal for the Canaries and earn them their third win of the season.

A moment that the 19-year-old has been patiently waiting for, along with a performance that merited the ‘Man of the Match’ award as well as a place in the Whoscored.com Premier League ‘Team of the Week’. Idah is the second Irish player to feature in the ‘Team of the Week’ this season after Shane Duffy’s two appearances in it at the beginning of the season.

Next to the second tier where Scott Hogan and Alan Browne came up against each other in a 1-1 draw between Preston and Birmingham City. Browne assisted the opener for Preston before Hogan cancelled out their goal with a diving header in the 86th minute.

Elsewhere, Peterborough United’s only goal of the game in a 4-1 defeat to Coventry City was assisted by Jack Taylor. Derby County’s Festy Ebosele also claimed an assist in their win over Sheffield United. The full-back ran the length of the pitch, leaving several players in the dust, before setting up Tom Lawrence for his second goal of the game. A fine demonstration of raw pace and power from the Irish U-21 international. It was also a special day for Jason Knight who made his 100th appearance for the club at just 20 years of age.

Aaron Connolly made his debut for Middlesbrough in a 2-1 victory over Reading while Darragh Lenighan played the full ninety in a 1-0 win for Blackburn which took them up to ten games without defeat.

Mark Travers was the only Irishman on the teamsheet for fellow promotion hopefuls Bournemouth who lost 3-2 away to Luton Town. West Brom, with Callum Robinson and Taylor Gardner-Hickman in the starting line-up, also fell to defeat against QPR. Finally, there was also a debut on Saturday for Cyrus Christie as he joined Ryan Manning at Swansea until the end of the season. Their game with Huddersfield Town finished all square at one apiece.

In League One, Will Keane netted his 12th goal of the campaign with a well-taken header in Wigan Athletic’s 2-1 away victory at Doncaster Rovers. James McClean set up Max Power for Wigan’s first of the game. The 32-year-old is now up to four assists in the league this season. Both men made the League One ‘Team of the Week’ along with MK Dons’s Peter Kioso.

Aiden O’Brien and former Ireland international Anthony Pilkington (his first goal for his new club) were both amongst the goals for their respective clubs Sunderland and Fleetwood Town.

Harry Charsley was introduced at half-time as Mansfield Town searched for an opening in their clash with Walsall. The midfielder went on to score a brace in the second-half, clinching the win for his side. His second was the pick of the two as he smashed the ball into the roof of the net from a tight angle at the near post.

The final Irish goal in Saturday’s fixtures across the pond came from the head of Bradford City’s Paudie O’Connor. The centre-half scored an 85th minute winner against Salford City. O’Connor is no stranger when it comes to goals this season having scored three already this campaign.

Another 90 minutes in the bank for Josh Cullen as Anderlecht squandered a 1-0 lead against Standard Liege with the game finishing 1-1. The point keeps Vincent Kompany’s side in the top four.

Alan Browne made it two goal involvements in two games in Preston’s 2-2 draw with Sheffield United on Tuesday night. An Irish trio of Enda Stevens, John Egan and Conor Hourihane started for the Blades, as well as Greg Cunningham who started at full-back for the home side. However it was Browne who had the biggest impact, scoring their first goal with a well-placed finish which triggered a late comeback from Preston.

In Morecambe, Will Keane was on the scoresheet yet again making it four goals from four games and bringing his tally up to 13 for the season. Arguably Ireland’s most in-form striker at the moment? Nobody would’ve predicted that this time last year.

Meanwhile at the other end of the pitch, Gavin Bazunu picked up his 11th clean sheet of the season in a 0-0 draw between Wimbledon and Portsmouth.

Jamie McGrath’s name was missing from the St Mirren matchday squad as speculation surrounding his future at the club continues to escalate. His team had a job to do though and Connor Ronan and co came away from Dundee United with a 2-1 victory.

Again Matt Doherty had to settle for a seat on the Spurs’ bench as they took on Leicester City in the league on Wednesday night. And again the Irish full-back was called upon at half-time. Doherty went on to create five chances for his team, including an assist for Steven Bergwijn as the London side fought back from 2-1 down to win 3-2 thanks to two very late goals from the Dutchman.

It was the battle of the Irish centre-backs in the Championship on Wednesday evening. Sean McLoughlin’s Hull City came out on top as they put a stop to Blackburn Rovers’ unbeaten streak. The Corkman has been a prominent feature in the Hull backline in recent months and made his tenth consecutive start in the win over Darragh Lenihan’s side.

Luton Town were the other victors on the night and brought Peter Kioso straight back into the starting eleven after he was recalled from his loan spell with MK Dons.

Caoimhín Kelleher started his sixth game of the season on Thursday night as Liverpool comfortably beat Arsenal by two goals to nil to progress into the final of the EFL Cup. The Corkman demonstrated his all-round game once again. He kept his third clean sheet on the season and amassed a total of 37 accurate passes (higher total compared to six of Arsenal’s starting eleven) as well as making two saves, including a fingertips save to keep out a Lacazette free-kick that look destined for the top corner. “We are more than happy with him” were Jurgen Klopp’s words post-match when questioned about Kelleher’s progress.