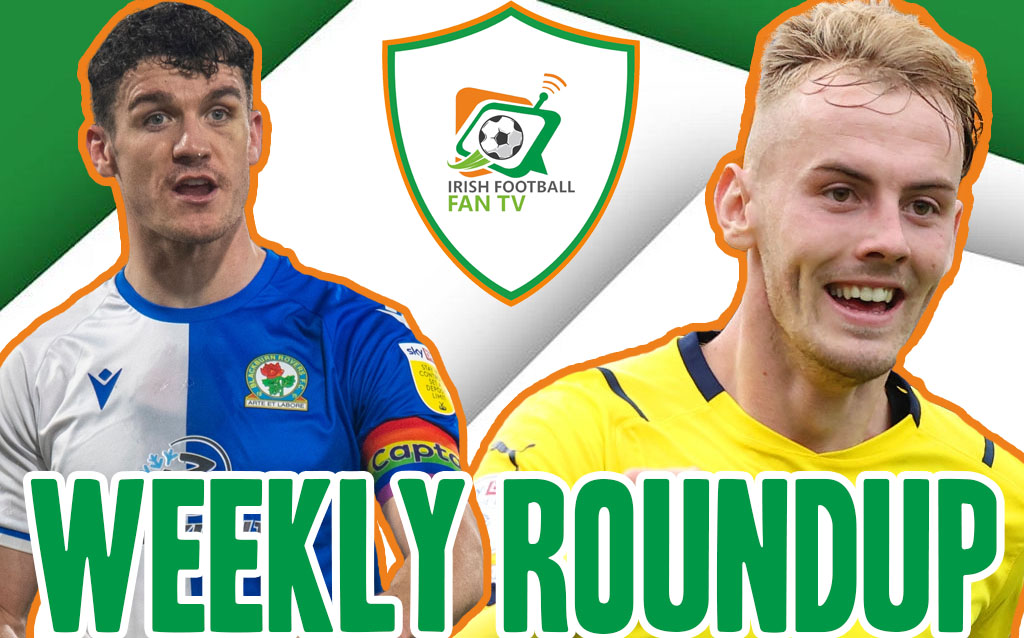 There was yet another clean sheet for Mark Travers in between the sticks for Bournemouth as they beat QPR by one goal to nil.

Adam Idah earned his second start of the season in a 3-0 away defeat to Crystal Palace. The result extended Norwich City’s losing streak to five games.

Despite speculation over his future at Spurs, Matt Doherty put in a good shift out of position at left wing-back after coming on at half-time against Southampton. The Irish international looked lively down the left-hand side, attempting four shots and creating three chances. The game finished all square at one apiece.

There was a seat on the bench for Evan Ferguson alongside Shane Duffy as Brighton secured a point against Chelsea with a late equalizer. However there was no space in the squad for the departing Aaron Connolly who has since head out on loan to Championship side Middlesbrough.

Darragh Lenihan’s season may potentially be going under the radar in the Championship, partially down to the fact that he is sharing a pitch with the in-form Ben Brereton Diaz. His form to date in this campaign has mirrored the type of form Blackburn have displayed in recent weeks and again he was one of their standout players in a 2-1 win over Barnsley last week. According to Whoscored.com’s player rating system, he ranks just below Brereton Diaz this season in terms of overall output amongst the Blackburn squad and seventh in the overall Championship player rankings. Hence his admission into the Whoscored.com December ‘Team of the Month’.

To the third tier where Mark Sykes netted his seventh goal of the season in a 3-0 win for Oxford United at home to AFC Wimbledon. The 24-year-old midfielder is producing the type of form that could earn him his first Ireland senior call-up.

There was an 11th clean sheet of the season for Mark Travers in Bouremouth’s win over Cardiff City. The Ireland international has conceded on average less than a goal per game in his 24 appearances thus far in this campaign. Both Gavin Kilkenny and Robbie Brady were missing in the 3-0 victory that keeps the Cherries at the top of the pile in the Championship.

Meanwhile Derby County pulled off another win in their bid to defy all odds and stay afloat this season after receiving a points deduction earlier in the year. Jason Knight featured in his 18th game of the season while Festy Ebosele was a second-half substitute as they beat Stoke City 2-1. Mark McGuinness started in defence for the visitors.

There was also starts for Callum O’Dowda and Jimmy Dunne for their respective clubs Bristol City and QPR. QPR came out on top in that clash, beating the home side by two goals to one in a win that keeps them fifth in the league.

It was that man again for Oxford United. Mark Sykes popped up at the back post and bundled in a late equalizer to level things up against Cheltenham Town. Make that eight goals for the season for Sykes (four in his last five league games).

Rumour has it Eoin Doyle could be returning home to Dublin this January window and starting the new season with St Pat’s but in the meantime he is still scoring goals across the water for Bolton Wanderers. The striker netted his seventh goal across all competitions in a 2-1 defeat to Rotherham United. Ireland international Chiedozie Ogbene assisted the winner for the U’s.

In the English fourth tier there was a hat-trick (kind of…) for Conor Wilkinson in Walsall’s 3-3 draw with Newport County. The 26-year-old forward was twice on the scoresheet for Walsall, either side of an own-goal down the other end for opposition. It was his second goal which was the most important one though as he buried a 95th minute equalizer to make up for the earlier mishap, and what a strike it was. Wilkinson teed himself up with two touches before volleying the ball into the top corner.

Seamus Coleman deputized in a left wing-back role in Everton 3-2 defeat to Brighton on Sunday afternoon. Shane Duffy featured for the final 30 minutes in the Albion win.

There was a battle of the Irish strikers in West Brom’s 1-1 draw with Cardiff City. James Collins opened the scoring for the Welsh side in the first-half with just his second goal of the campaign. The striker directed his header into the bottom corner however his goal was cancelled out by Callum Robinson after the break who found the equalizer with a composed finish into the same corner of the net. Robinson is now up to five goals for the Baggies this season. Mark McGuinness, Jayson Molumby and Taylor Gardner-Hickman also featured in the draw.

Another full 90 minutes in the bank for Jason Knight as well as a 16th appearance of the season for Festy Ebosele in Derby’s 2-2 draw away to Reading. There was also a start in midfield for Alan Browne in Preston’s 2-1 victory at Stoke.

Gavin Bazunu leads the way in terms of clean sheets in League One after Monday’s goalless draw between Portsmouth and Cambridge United. The Ireland number one is now up to double figures, amassing a total of ten clean sheets with Pompey exactly halfway through their fixture list. Not bad going.

Kieran Sadlier made it four goals in five EFL Trophy appearances when he opened the scoring for Rotherham United in a 4-2 victory over Crewe Alexandra. The midfielder doesn’t do tap-in either, scoring another long-range effort in the cup to give Rotherham the lift they needed. Fellow Irishmen Chiedozie Ogbene (two assists in two games) and JJ Kayode combined in the second-half for their third goal, with Kayode heading in his first goal for the club.

Will Keane was also amongst the goals as Wigan Athletic thrashed Oldham Athletic 6-0 on Tuesday night. The forward headed in Wigan’s second of the game and his 11th of the season across all competitions.

Matt Doherty made a rare start for Spurs in their semi-final clash with Chelsea in the Carabao Cup. However his evening’s work only lasted 45 minutes before he was replaced at half-time with his team 2-0 down.