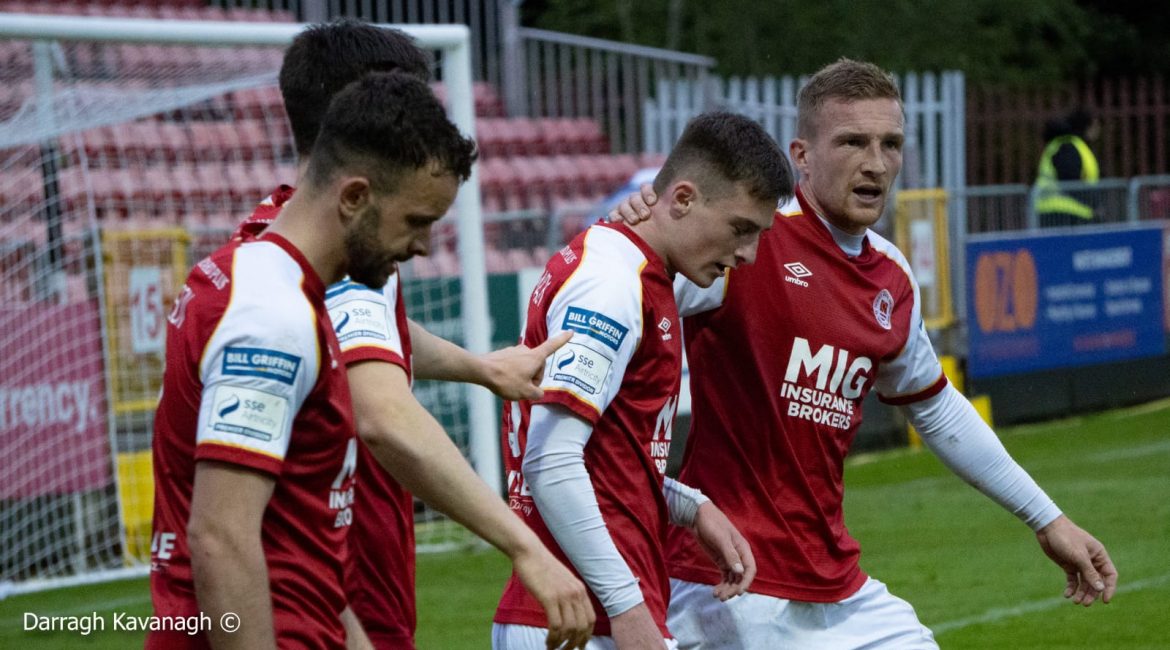 Two weeks after conceding a 92nd-minute goal against Shamrock Rovers, St Pats got their own bit of injury-time joy this evening, as Robbie Benson converted a penalty in the first of five added minutes.

It looked like Bohemians had done enough to earn a share of the spoils when Dawson Devoy converted an 89th-minute penalty, cancelling out Matty Smith’s opener in the 74th minute. However, substitute Benson had the final say when he slotted his spot-kick down the middle.

This was a typical derby game, with a good edge to it and plenty of tackles flying in, but the quality on display, especially in the first half, wasn’t always the best. The second period did see the standards raised and played at a better pace.

There were three penalties awarded and the inaugural of those came in the 10th minute for the visitors. Tyreke Wilson’s free-kick crashed straight into the wall from just outside the box, but referee Rob Hennessy deemed the full-back’s strike to have hit an opponent’s hand.

Up stepped Georgie Kelly against his former employers, but he could only hit the woodwork and the ball ran to safety.

The rest of the opening half was low on chances. Bohs looked the better side until winger Liam Burt picked up a knock at the mid-way point, and that appeared to take the wind out of the Scot and his side’s sails.

Pats ended the half the stronger, but a long-range powerful attempt in the 31st minute from Sam Bone, that James Talbot got down to his right and saved firmly, was the closest they came.

The game saw an increase in creativity after the break. In the 53rd minute Ali Coote, from an acute angle inside the box, tested the hands of Vitezslav Jaros but the Liverpool loanee made a smart save which resulted in a corner.

With twenty-minutes remaining, the Gypsies hit the frame of the goal again. This time a free-kick from Wilson (in an identical position to his one in the first-half) thundered off the crossbar.

Moments later that same man put a cross in from the left and picked out an unmarked Kelly, but the Donegal native could only head straight at Jaros.

The deadline was finally broken in the 74th minute, when good play by Benson found Smith, whose effort from about 14 yards out beat Talbot at the far post.

Then that late drama. Keith Long’s men switched play over to the left and Burt got inside John Mountney. The initial contact seemed outside the box, but referee Hennessy had no hesitation in pointing to the spot.

After a delay caused by heated discussions on the touchline which resulted in Stephen O’Donnell being sent off, Devoy smashed the ball home to Jaros’ left.

It looked like the Inchicore club were heading for a fourth game without a win, until Ciaran Kelly fouled Benson when challenging for Mountney’s deflected cross.

The Athlone man picked himself and showed the composure required to give the hosts their first home win over the Phibsborough club since 2016.