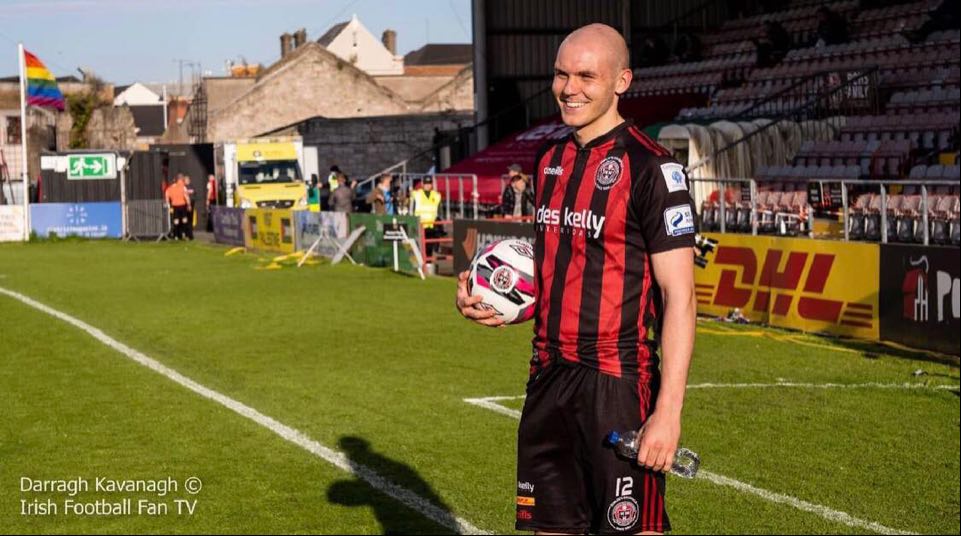 A first-half Tyreke Wilson free-kick and an injury-time goal from Promise Omochere completed an excellent performance by Keith Long’s charges, while Greg Sloggett got a conclusion for The Lillywhites in the 80th minute. Both sides also finished the game with 10 players, as Wilson and Cameron Dummigan were dismissed after the break.

It only took the hosts five minutes to start their demolition job. A clearance down the middle saw Kelly flick the ball onto Liam Burt, who played in Ross Tierney. Inside the box, Tierney laid the ball off to Kelly, who with his back to goal, adjusted his body and applied a cool finish.

Four minutes later, their lead was doubled, when Wilson’s free-kick from about 30 yards out flew past Alessio Abibi in the Dundalk goal.

Bohs bossed the opening exchanges, with the likes of Burt and Ali Coote constantly stretching the visitor’s defence. The county Louth side did enjoy a purple patch from the 20th to the 30th minute, where they missed golden opportunities to get back into the game.

Firstly, Daniel Kelly failed to hit the target with a free header from a Michael Duffy corner on the right in the 23rd minute. Then a minute shy of the half-hour mark, a lovely cross on the opposite side from Patrick McEleney found David McMillan at the far post, but the striker made a poor connection with his head.

The Gypsies ended the half stronger and very much on the front foot. A Tierney header from a Dawson Devoy cross, that Abibi tipped over, was the closest they came to another goal before the break.

Once again, it only took the home side five minutes into a half to find the net. Kelly, with his second, after his initial ball sent Burt away, who then put the ball on a plate for the 24-year-old to leave his older club with a mountain to climb.

After receiving a previous yellow card, full-back Wilson was given his marching orders in the 52nd minute for a challenge on Daniel Kelly and a minute later, Dundalk should’ve got back into the game.

McEleney again with a cracking cross and there was Wilfried Zahibo alone at the back post, but he could only direct his header straight at James Talbot.

Despite being a man light, the Phibsborough club made it 4-0, 19 minutes into the second half, and Kelly completed his hat-trick. Coote’s free-kick in front of the Des Kelly stand picked out the Donegal man, who did the rest.

A horrible night for Jim Magilton’s side got worse 10 minutes later when Cameron Dummigan was heading for an early shower. He received his second yellow card after a foul on Burt.

Credit to Dundalk, they never threw in the towel, and after McEleney hit the post and Junior Ogedi-Uzokwe had a shot cleared off the line, substitute Sloggett gave them something to show for their efforts. His long-range rocket left Talbot with no chance in the 80th minute.

More misery was still to follow for last season’s FAI Cup champions though, as Omochere’s first league goal in stoppage time rounded up the riot and gave Bohs their second win in this fixture of the current campaign.