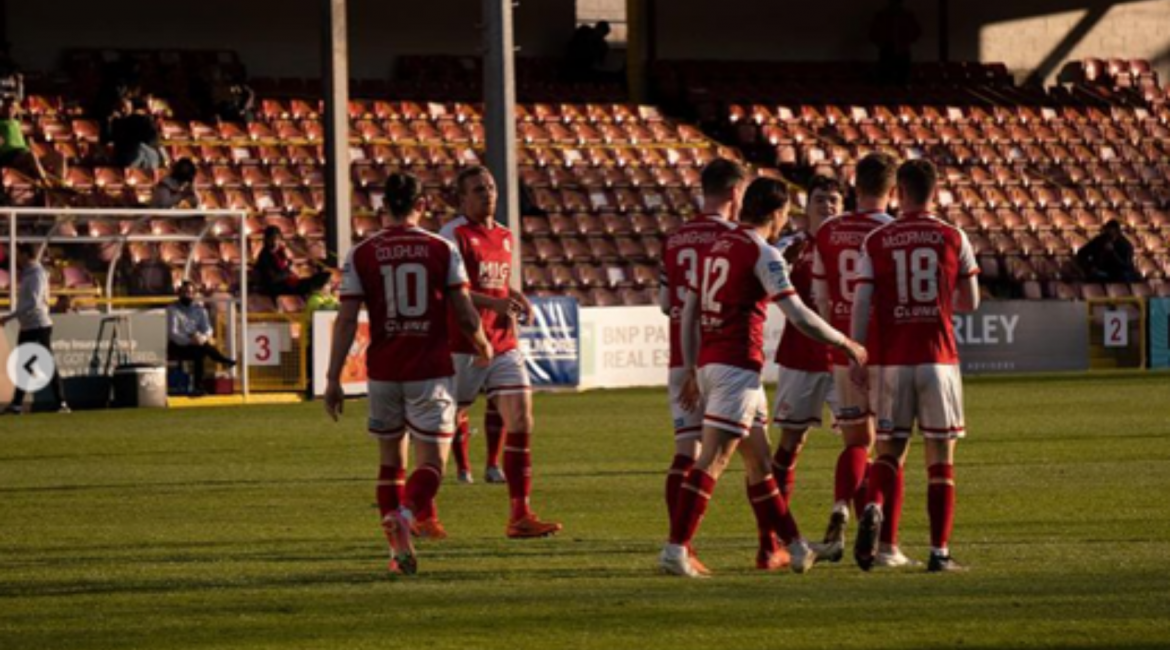 BY GERARD BROWNE
Goals from Robbie Benson, Matty Smith and Ronan Coughlan helped St Pat’s to a much needed, but deserved win over Longford Town at Bishopsgate last tonight.

Benson broke the deadlock in the 41st minute, before Aaron Dobbs equalised for the hosts three minutes in the second-half from the penalty spot. Finishes from Smith and Coughlan ensured the Inchicore club would leave satisfied.

Pats had only won one of their last half-a-dozen games before the mid-season break, a run that saw them fall from first to third. Sligo Rovers defeat to Drogheda means Stephen O’Donnell’s and Alan Matthew’s charges are only three points off top spot. Longford are now on a five-game losing streak and bottom of the table.

Two hundred spectators were allowed at Bishopsgate for the first time since October, but that didn’t faze The Saints. Only a combination of a poor end product and fine goalkeeping from Lee Steacy delayed the inevitable.

Steacy tipped over a Paddy Barret header in the 8th minute from Benson’s corner. Two minutes later the Midlanders’ netminder was at full stretch to stop Coughlan’s free-kick from opening the scoring.

Barret again with a header in the 28th minute and Smith in the 34th minute didn’t show the calmness required when glorious opportunities arose. Four minutes shy of half-time, the visitors’ frustrations were lifted with the breakthrough.

John Mountney’s corner from the right found Benson, whose header had enough power to scramble over the line despite Steacy’s best effort.

Pat’s were comfortable in that first period, but they gave the home side a lifeline three minutes after the match restarted. Sloppy play saw them give the ball in a dangerous area, and Alfie Lewis took down Rob Manley inside the box. Dobbs did the rest from 12 yards out, sending Vitzeslav Jaros the wrong way.

Longford grew in confidence from that boost, but found themselves behind again a quarter of an hour later.

Aaron Robinson gave possession to Chris Forrester, the midfielder unleashed a rasper that Steacy could only parry, and Smith fired in the rebound.

The winger should’ve sealed the game with twenty minutes left on the clock, when substitute Darragh Burns set him up nicely about 14 yards out, but the Scot blasted over.

Coughlan’s fourth goal of the season ten minutes later made sure nobody will remember that miss, by putting the contest to bed. That man Burns delivered a delicious cross, a flashing header by the attacker completed a good night’s work for the Dublin outfit.