LOI players and fans hopeful of a return to action 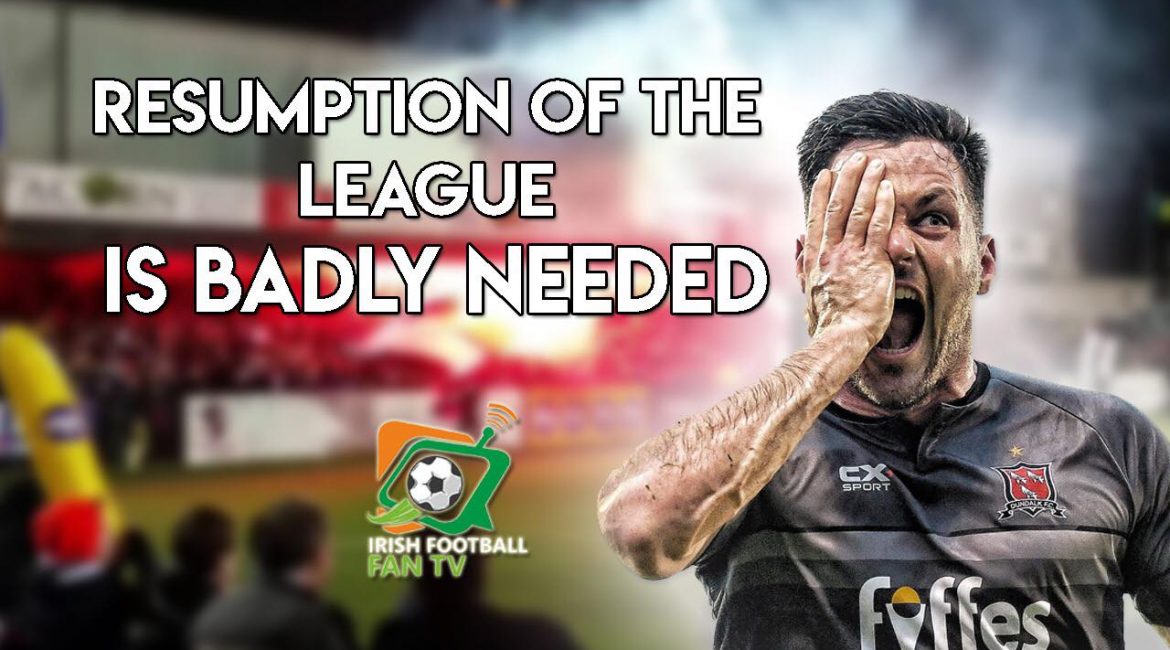 The current  status of our domestic league and the confusion that surrounds it has left all involved both maddened and frustrated.

Following unconvincing proposals to persuade clubs it’s worth restarting the season and weeks of date speculation, patience levels of both players and fans are definitely running dry. An exciting start to the season had given the league a needed boost. Attendance figures were up and one could argue there was an added spice to this season. Rovers found themselves enjoying initial bragging rights as they sat pretty at the top of the table, playing with a certain fluidity and panache which left many feeling we were in for a hell of a season. Dundalk were hot on their tails. Bohs were looking promising, whilst the Tolka faithful were enjoying life back in the fast lane.

Although the halt was untimely, fans and players would understand and eventually come to terms with the new way of life, given the misfortunate circumstances that took the world by the scruff of the neck. However, as the country has turned the floodlights back on and the world of football on a global front too has recommenced, all involved feel the League of Ireland shouldn’t differ.

Speaking to Paul Nealon on IrishFootballFanTV on Monday night, Dundalk’s Pat Hoban shone a light on how important it is to get the league back up and running, at a time where people are in need of something to look forward to.

“You can’t control what’s happened, but all we can do is hope something comes back. Ireland needs Irish football massively and we just need to get it back sooner rather than later because it would be disastrous if there was no league at all.

“Everyone wants it to go back, everyone i’ve talked to wants it to go back. We need Irish football to be back in this country, not just for players alone but for the fans as well, you know, the fans all want it back, something to live for on Friday nights. For that game of football that’s going to be on, they want football to be back too and we as players want to entertain. We want to be out on the pitch and do our part for the club and for all the fans as well. If you don’t have that in this country it is going to be disastrous for the league in the next few years.”

Updates on procedures are expected to be announced on Wednesday, all involved hopeful a feasible plan can be put in place amid the unhealthy economic situation the league finds itself in. As it stands, Dundalk, Shamrock Rovers, Bohemians and Derry City are set to take part in a four team tournament to prepare them for the forthcoming European competition. Hoban stressed his concerns on how far behind the four clubs will be in comparison to their European counterparts who will have far greater groundworks laid on the preparatory front.

“You look at all the teams that we could be getting in Europe, they’ve been back for the last 7 weeks, 8 weeks playing games, training, 11 v 11’s, we’re only allowed to have 10 or 15 in at one time, so we are miles behind other countries when it comes to football. Miles behind them for fitness wise, match fitness, not fitness, totally two different things you can ask any footballer, match fitness to normal fitness are two totally different things so in that regard, we’re behind.

With so many talented Irish youngsters plying their trade in the League of Ireland, it is essential a plan can be put in place to further develop our nation’s players at what is a vital stage in their careers. Hoban, who claimed the league’s golden boot in 2018 with a staggering 29 goals, went on to add how he would be content with playing in front of no fans, if it meant getting the league up and running again, as it is vital for developing future Irish footballers.

“If the league was to come back and we weren’t able to have any fans, I’d take that for the time being, just to be back playing. To get the league up and running again is massively important for Irish football, you’ve players who are developing at clubs who could be playing for Ireland in the future and they can’t afford to have years off their careers.

The need for the league’s resumption, sooner rather than later, is imperative. The league’s players are all eager to get back to hone their skills and put on performances for their respective fans every Friday night. The fans are itching to get back to their favorite venues. All involved with the League of Ireland  are aching at the thought of being the only league in Europe without a resumption date to cling to. In the wake of another meeting between the clubs and the FAI, here’s hoping white smoke awaits.