Kelly spot on to rescue a point for Bohs 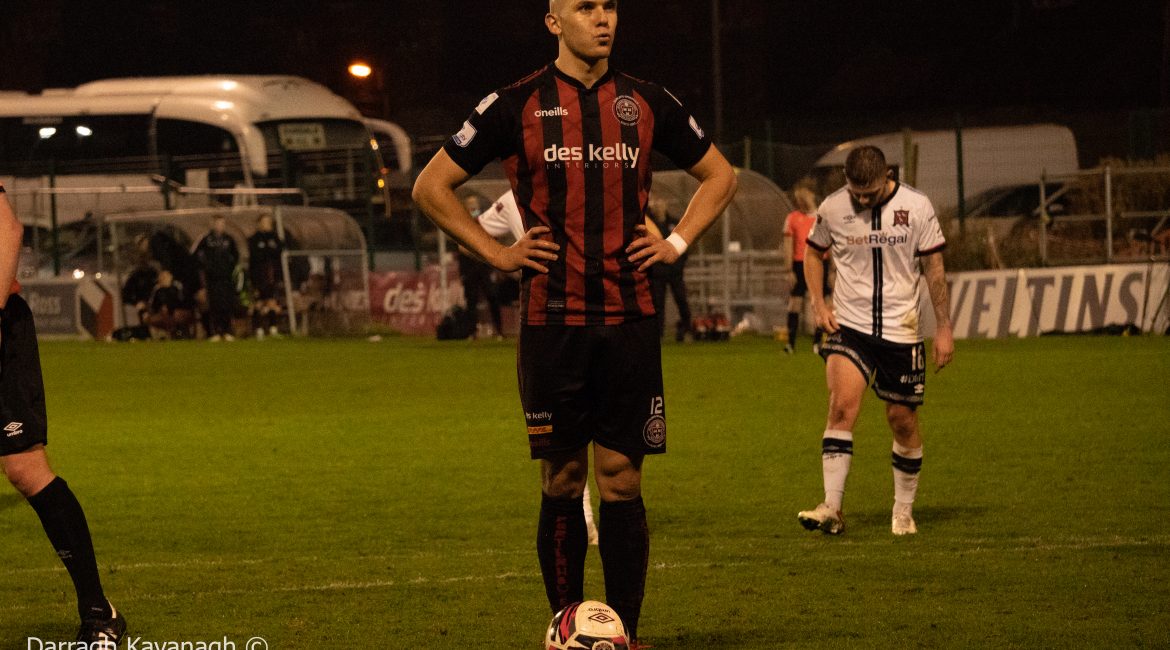 By Gerard Browne
There was late drama at Dalymount Park as Georgie Kelly converted an injury-time penalty to rescue a point for Bohemians against Dundalk.

There was huge controversy over the decision to give the Phibsborough club the spot-kick as referee Damien McGraith originally awarded a free-kick to Dundalk, identifying substitute Ali Coote as the guilty party on Daniel Cleary.

After communication with his linesman on the Jordi stand side, his initial call was overruled. Kelly took the responsibility and he had just enough power to squeeze past Peter Cherrie and move onto 19 goals for the season.

The Lillywhites’ goal in the first half also raised a lot of question marks. The home faithful felt play should’ve been stopped when goalkeeper James Talbot and Pat Hoban collided with each other, but the play continued and Sami Ben Amar lobbed the ball into an empty net.

Bohs have now lost further ground in their European ambitions, slipping three points behind Derry City after the Candystripes win over St. Pats. Dundalk’s gap over the relegation play-off place had been cut to the same margin with Waterford beating Finn Harps.

The county Louth outfit had the game’s opening chance inside the first minute. Michael Duffy and Hoban linked up well down the left, the former got a shot off that was never going to cause panic for Talbot.

It was the hosts who controlled matters after that for the opening quarter, with Promise Omochere and Dawson Devoy in particular providing concern for their opponents. Despite dominating most of the play, the failure to get register a meaningful attempt will have been a source of frustration for Keith Long.

The away side weathered the mini storm thereafter but Bohs felt hard done not to be awarded a penalty in the 22nd minute. Sam Stanton made clear contact with Liam Burt, but referee McGraith deemed the foul to be outside the box. The resulting free-kick from Tyreke Wilson didn’t live up to his usual high standards.

This spurred up both the home crowd and players. Andy Lyons burst forward from right back with a powerful strike that deflected behind for a corner in the 27th minute. Wilson’s delivery found the head of Kelly, who will have been disappointed with his end product.

However, sixty seconds later they were behind as Ben Amar finished an attack that came about from him keeping a hopeless case alive along the touchline of the stand side.

The Gypsies never looked like levelling matter before the interval. Their best moment saw Omochere play in Ross Tierney down the right, but Cherrie was quick to close the angle and kill any momentum of the opportunity.

Two minutes after the restart, Bohs had a glorious chance to equalise. A ball over the top by Burt found that man Kelly, who chested it down to Tierney. With plenty of time and straight in front of the goal, the Ireland Under-21 international completely under-hit his strike from 18 yards out.

The second half continued to follow a similar pattern to the first – Bohemians dominating the ball but their cutting edge letting them down. Dundalk always looked like a threat on the break and just shy of the hour mark substitute David Millan teed up Greg Sloggestt with a header outside the six-yard box, Sloggett never got the connection that was required to trouble Talbot.

The fingertips of Cherrie at the other end were firmly called into action three minutes later, as Omochere was the unfortunate player to see that his luck wasn’t in.

Vinny Perth’s charges should’ve taken a big step to secure the victory with twenty minutes left on the clock. McMillan couldn’t take advantage of Talbot’s fumble, as the 24-year-old found Will Patching’s long-range effort too hot to handle.

In the first minute of time added on, the price was paid for that miss when one of their old colleagues sent the majority in attendance home with something to smile about.