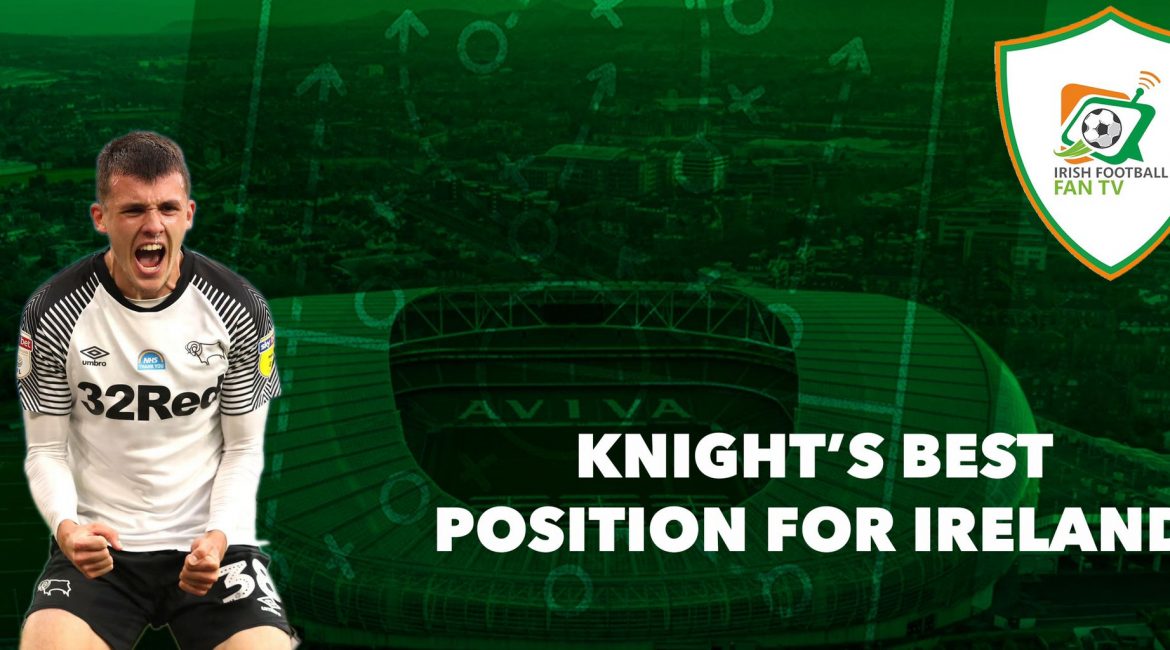 All action midfielder Jason Knight is only 21-years-old, but he has already made over 120 senior appearances for club and country. In these appearances, he has played virtually every position possible in midfield as well as part of a front 3, most recently for Ireland. This versatility speaks to both his willingness and desire to help the team, and his well rounded ability as a footballer. In an interview in 2021 with The Athletic, Knight said himself that he sees himself as a number 8 or box-to-box midfielder. “The type that gets goals and stops goals going in the other end”.

Derby County’s financial struggles this season have been well documented and have lead to their manager Wayne Rooney, being unable to sign players and having to field line-ups of almost entirely academy players. Knight is well past the tag of “academy player” having played over 100 times for the club and having captained the side. Rooney even revealed that in training, he ran a “young vs old” possession game, and Knight was on the “old” team, indicative of the club’s playing staff situation.

Despite this record, Knight has not quite been able to nail down a starting position for the national side. He has already gained 11 caps, however only 5 of these have come from starts. Knight is only 21, so his time will come, but it feels wrong to talk about him as if he is young player given his experience at club level. For Ireland, since changing to the 3-4-2-1 system, he has featured both as part of the two central midfielders, and part of the front 3 as one of the two 10s/wingers. Which role does he suit better though?

One of Knight’s greatest attributes is his unrelenting tenacity. He will chase everything and run all day long. However, underneath this, is a very good technical player. His assist for Derby against Luton in October, a game in which he also scored, characterises these strengths.

Knight senses the opportunity to win the ball back for his team high up the pitch and closes down the opposition, winning the ball cleanly.

He then slides the ball into his teammate with the outside of his foot before they finish.

Also a strong dribbler who has been one of the most fouled players in the championship this season with 2.32 fouls drawn per 90 at time of writing. Particularly useful when you have Shane Duffy on your team.

In the interview with The Athletic, Knight also stated “Like Frank (Lampard)- that’s the type of player I want to be”. Part of realises that, would be an appreciation of movement in the box and getting into goal scoring positions in the box. Something that lead Lampard to become one of the top scorers in Premier League history. The game against Luxembourg where Knight came on as a substitute with the game 0-0, showed off both his propensity to be fouled, and his movement into the box. Knight came on just after the hour mark. Ireland were struggling to create clear chances and Luxembourg had just had an opener ruled out, arguably dubiously, by VAR due to a push on Duffy in the lead up. Knight came on, and within 5 minutes, won a free kick on the edge of the penalty area with his dribbling which Duffy scored from.

Knight then went on to record 2 assists, both coming from his runs into the box. The first, comes from his sitting on the defensive line before timing his run perfectly into the box.

He then has the presence of mind and the vision the backheel the ball with his second touch to Chiedozie Ogbene who runs behind him and finishes. The chance came from Ireland pressing high up the pitch and winning the ball back, before Knight making the run, akin to that of a world class striker, and Jeff Hendrick picking him out.

For the second assist, Knight’s run actually starts halfway inside the Irish half when they win the ball back.

He then makes up the ground as Ireland counter-attack. Here we can see him stay wide in order to either, have the space himself to receive the ball and do something with it, or, to stretch the defence and open up space in the middle for a teammate to run into.

The ball is crossed into him at the back post and he cushions the ball to Callum Robinson when he probably could have finished himself, but he decided to give it to Robinson to slot into the empty net rather than take the chance.

Against Belgium, Knight started on the left of the front 3 which actually was fluid, and the 3 swapped positions frequently. Ireland pressed high this game, and got joy from this approach just after half time when Knight bared down on the Belgian keeper, which allowed Ireland to box the Belgians in and win the ball back when the defender was forced to play a risky pass to a player marked closely by Seamus Coleman. This lead to the open goal chance which the Belgian defence recovered well for.

This passage of play shows how Knights tenacity can be utilised as part of the front 3. A player who saunters towards the goalkeeper instead of pelting it down like Knight, doesn’t force the pass into the already congested area, instead of the calm pass out to the right sided centre back who is open.

Ireland’s front 3 also requires, as we have learned over the course of using this system, s player who is more of a playmaker. For instance, we have seen Jamie McGrath thrive there. We have also seen a front 3 of Adam Idah, Aaron Connolly and Troy Parrott, against Azerbaijan at home, not work, due to not having that player who can play the pass and create the chance. However, this playmaker cannot be the type who conserves their energy in defence in order to have more ability to attack. This player has to work as hard as anyone else, and Knight may even prove to work even harder. The Luxembourg away game also shows how Knight can create these chances, and also, how he could possibly score a couple himself, because where the assists came from, Knight arguably could have scored himself.

The other option for Knight to play for Ireland, barring a change of system which seems unlikely currently, is as part of the central midfield alongside somebody else. Because of the type of player Knight is, it would be most likely be Josh Cullen. Knights all-action style would provide serious legs in midfield which of course is a good thing. But like Knight said, he wants to a box-box midfielder, scoring goals. The question is does the system allow this freedom to the midfield. Cullen is very disciplined positionally. He almost always will sit back and recycle possession. This allows the other midfielder more freedom. And we have seen Jeff Hendrick pick up assists from this freedom. Against Qatar, for example. We don’t find Hendrick in the box however, he does sit back like Cullen although to a lesser extent. He will push up to the right half space to create chances. The half space is the vertical space the length of the pitch in between the outside line of 6 yard box and the penalty area.

These areas are where a lot of chances are created from nowadays. Think Trent Alexander-Arnold for reference. The is right half space is where he creates the most chances from.

He has all the attributes to play this position. However, he is a young player, and the question is whether he has the discipline to stay to this position and not roam too far forward, as this leaves the side exposed on the break if they were to lose the ball. In defence, he does also go to win the ball back a lot. Which sounds like a good thing. But in a midfield two, if Knights decides to go and put pressure on, he can be played around easily if the opponent plays with 3 in the middle.

You don’t want to take this aggression or his runs into the box out of Knight’s game however, so for this reason, it might be more beneficial for Ireland to keep knight as part of the front 3, unless Stephen Kenny switches to a 3-man midfield. And in that case, Knight may be the first name in that midfield as a number 8 as he would have more cover behind him to make those runs into the box and to go chasing down opponents trying to win the ball back. As he develops more however, we may see him drop back and become part of the centre midfield.