From a new contract with Brighton to that celebration against Forest, IFFTV caught up with U21 captain Jayson Molumby

Irish Football Fan TV > Uncategorized > From a new contract with Brighton to that celebration against Forest, IFFTV caught up with U21 captain Jayson Molumby 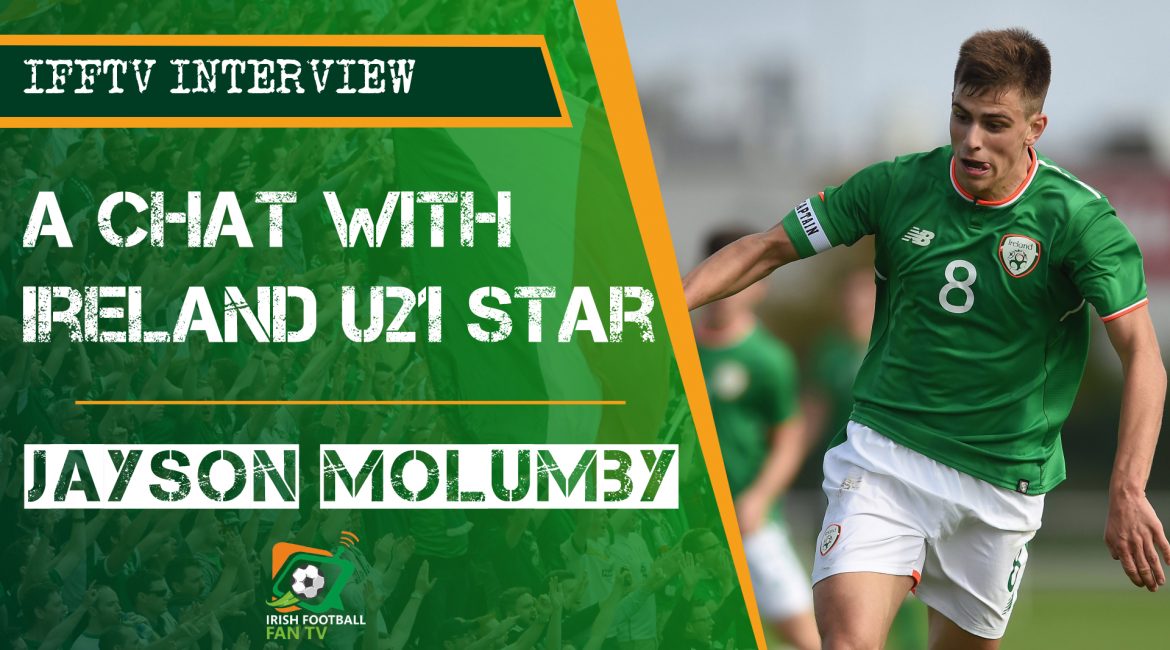 From some stellar  performances captaining his nation’s U21 side, to becoming a fan favourite at Millwall, it has been quite the breakthrough for Jayson Molumby thus far.

Although just 20 years of age, the midfielder plays with a certain guile and sense of maturity which has so paved the way for him playing week in and week out at a Millwall side who sit just two points off the Play-Offs.

At international level, Molumby will be best remembered this season for some special nights in Tallaght. A man of the match performance in a second round victory over Armenia in the Euro qualifier, followed by a well taken late free kick that almost found the net and subsequently would have toppled Italy at the same venue a month later, the Waterford man’s endeavours have earned frequent plaudits.

With the football world at a standstill amid the Coronavirus Covid 19 pandemic, it is unfamiliar territory for both fans and players. The untimely ceasefire to the season one could argue comes at a more frustrating time for Molumby more so than other players. Although not documented under his name on file, his most recent game with Millwall saw his strike against Nottingham Forest give the youngster what he claimed as his debut goal. His U21 side were awaiting some big clashes in their quest for qualification to next year’s Euros. Mick McCarthy’s squad announcement for the crunch clash in Slovakia was just days away when everything came to a halt, with many feeling Molumby’s inclusion had been warranted. With the way things were playing out for him, Molumby agrees the stop was untimely.

“Yeah look it’s misfortunate, obviously with the euros coming up and especially with Millwall as well, we were on a good run. We were a few points off the play offs and we’d gathered some good momentum after that 3-0 win against Forest so it’s a bit of a misfortunate time for it all to happen, but at the end of the day there’s more important things that have to come before football at the moment.”

Both fans and analysts of the game had speculated that given our need for a box to box midfielder and given his rich vein of form at the time, the youngster’s name could have been on the tip of McCarthy’s tongue. Like any footballer with realistic aims, he hoped to hear of his name on the ticketlist for the plane to Bratislava. However, like Irish fans, Molumby was aware that Mick McCarthy has his entrenched style and isn’t one for taking chances in the build up to important games.

“I’ll be honest I was hopeful I might have got a shout, I felt like I’d been doing well.

“I know it’s not exactly a game for young lads as Mick stated given the circumstances, but I was hopeful to get in the provisional or something.”

Besides this, with some crunch clashes approaching under Stephen Kenny with the remainder of the qualifying campaign,  he added how he didn’t get too caught up in the speculation surrounding a potential senior call up.

“At the end of the day I was more focused on the 21s more than anything”,

“Given our position in the group and what we had coming up, I was looking forward to that a lot, so i wasn’t stressing too much over a potential Slovakia call up.”

With the responsibility of captaining his U21 side, an added sense of pride must be felt when he sees his teammates making strides outside of Stephen Kenny’s set up. Although rivals at club level, Molumby is delighted to see Dara O’ Shea (West Bromwich Albion), Jason Knight (Derby County) and Conor Masterson (QPR) flourishing with their respective sides.

“It’s brilliant. Obviously to have four of us playing frequently at championship level, it’s a huge advantage for the U21 side. More so than that i feel we’ve all performed well, and then with more lads doing well at league one and stuff it’s just great to see.”

Sticking with teammates, Jayson was delighted for his good friends Lee O’ Connor and Aaron Connolly getting their bite at the cherry with Mick McCarthy’s senior side.

“I’m obviously delighted for the two of them. Lee i’ve known since i was very young, we’d be good mates and to see him getting his international debut at senior level, it’s obviously the stuff of dreams.

“With Aaron obviously I know well through Brighton, doing well in the premier league scoring on this debut speaks for itself really and so i was delighted for both of them getting their shot.”

With all things football currently up in the air, one could only build a hypothesis as to what way everything is going to occur with McCarthy’s current tenure. That being said, Jayson feels although there are  U21s more than capable of making the step up to senior level when Stephen Kenny takes the reigns, fans shouldn’t expect an onslaught of youngsters all at once.

“Look obviously it’s a huge benefit when Stephen takes over, the fact he’ll know the young lads so well given his current role with the 21s. He’ll know what attributes us younger lads could bring to the table and then it’ll be up to him.

“Obviously the current senior squad is full of established professionals, many are premier league players, players who have had really good careers so it’s good for Stephen. He’ll  be able to jiggle with it and get it right.

“There’s not going to be an absolute overhaul of young lads coming up at the same time. I feel it’s a case of  “If you’re ready you’re ready”, but with a bit of good luck and timing eventually players from the 21s will start getting their shot at senior level.”

Next, Molumby discusses the aforementioned goal against Forest, and the somewhat bizarre dance celebration that followed. The celebration, which can be seen below, attracted quite a bit of attention.

The goal was given to striker Matt Smith for his slight deflection, with the same player saying after the game that Molumby’s celebration probably merited the goal.

Speaking of the  moment at the City Ground and whether or not the celebration was planned, Molumby joked: ““Obviously I thought it was my goal, I only figured out after the game it wasn’t in my name.

“But as for the celebration, it wasn’t off the cuff. A few of the boys had said they’d seen a bit of a dance going around and they’d said to me “if you score Molumby you have to do the dance” and i just said yeah why not i’ll do it, so you could say it was planned.”

The youngsters exploits on the field with loan club Millwall were recently rewarded with a 3-and-half- year contract with Brighton & Hove Albion, a deal which will, upon his return to The Amex for next season, keep the  player at the premier league club until the summer of 2023. Although supporters of The Lions will be sad to see him go given his status as a fan favorite at The Den, Molumby was delighted to sign the dotted line with the club he has been with since he was 16.

“I’m absolutely buzzing with it. I love Brighton. Obviously I was so young heading over there,  I was well looked after.

“Now whenever my season with Millwall finishes its onto the next chapter returning to Brighton, the club that has shown i suppose serious solidarity with myself and so i’m obviously really looking forward to the next couple years there and what its going to bring, I’m excited for the future so yeah, it feels good.

Speaking of the new contract following the news, Brighton’s technical Director Dan Ashworth said the new contract “is a reward for his professionalism and hard work and i’m sure he will be looking to make a big impact when he comes back to the club”.

With Brighton currently at 15th in the table and  three spots above relegation, the prospect of Premier League football is something the former Railway Athletic and Villa FC player relishes.

“That is the ultimate aim. Playing in the Premier League, it’s what I want to do.

“With Millwall at the moment it’s obviously the aim to try to get the team there and I’m focused on that first and foremost before I go looking too far ahead to next season.

“But yeah, playing at the top level is obviously the dream.”

Although a lot of uncertainty surrounds the footballing world at the moment, Jayson Molumby’s aim to  play at the top level for both club and country, seems all but imminent.