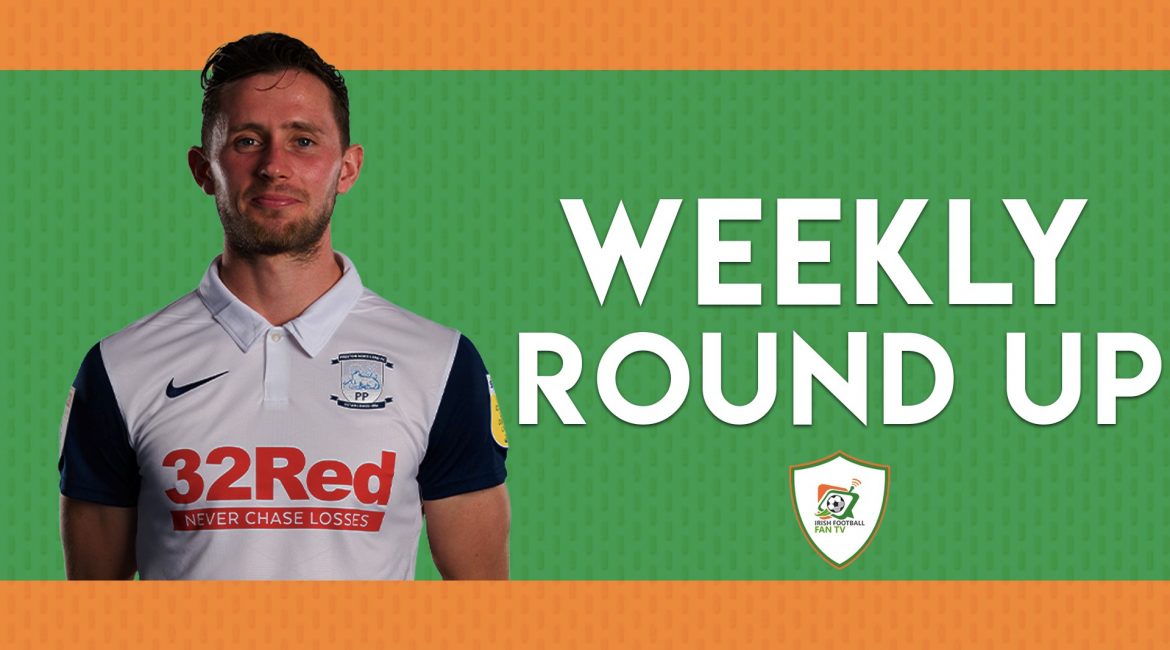 Another loss for Newcastle as they were knocked out out of the EFL Cup after losing 1-0 to Championship side Brentford. Ciaran Clark started whilst Jeff Hendrick was on the bench.

Stoke City, with Nathan Collins and James McClean starting, hosted Matt Doherty’s Spurs with the Premier League side coming out on top thanks to goals from Gareth Bale, Ben Davies and Harry Kane.

Everton bowed out of the League Cup as Manchester United won 2-0 and continue their impressive form. Seamus Coleman captained his team on his return to the starting eleven.

Getafe remain 12th in La Liga with a game in hand following a 1-1 draw with Celta Vigo. John-Joe Patrick Finn was called upon from the bench on the hour mark. The Getafe players demonstrated a touch of class before kick-off, sporting t-shirts with Ryan Nolan’s name on it. The Irish defender recently tore his ACL and will miss the rest of the season.

Following another injury setback for Southampton striker Danny Ings, Shane Long’s serviced were required for their clash with Fulham. The game finished all square with Long featuring for 90 minutes.

Jeff Hendrick was left out of Steve Bruce’s squad at Newcastle with no official confirmation on the reason as to why. Injuries and COVID-19 have ravished the squad in recent weeks. Ciaran Clark did start as part of a Newcastle back five, but they were unable to keep out Manchester City who were eventual 2-0 winners.

Unfortunately for Enda Stevens and John Egan there would be no Christmas miracle as they lost yet again. Everton, their opponents on this occasion, played without Seamus Coleman until the 66th minute. The Toffees went on to grab the winner in the 80th minute.

In the Championship, Alan Browne’s 97th minute winner against Derby County was the highlight of the weekend. The Preston captain fired into the top corner with his left foot to seal the win for his team. A terrific finish from the Irish international which merited him a place in the Championship ‘Team of the Week’.

On the other side, Jason Knight started for Derby whilst Republic of Ireland U-18 international Louie Watson made the bench.

Elsewhere, Bristol City clinched a late win against Wycombe Wanderers. Callum O’Dowda set up their first. There was a fourth consecutive clean sheet in the league for Nathan Collins and James McClean at Stoke City as their game with Coventry City ended all square.

Another stand out performance for Lincoln City and Anthony Scully. Scully continued his impressive form with an assist and a goal (third goal in video below). That was his second goal in as many games.

Will Keane also found the net from the penalty spot in Wigan Athletics’ 1-1 draw with Shrewsbury Town.

Former Ireland U-21 midfielder Liam Kelly provided an assist for Oxford United’s second goal in their win over AFC Wimbledon.

Wes Hoolahan scored Cambridge Town’s opener in their 2-1 victory over Leyton Orient. Hoolahan has now contributed to six goals this season for Cambridge (2 goals and 4 assists) and we haven’t even reached the halfway mark in terms of games played. Are you watching Stephen Kenny?

It was an eventful day for Dublin native Peter Kioso. The 21-year-old defender scored the pivotal equaliser for Bolton Wanderers in a thrilling 3-3 contest with Carlisle United. Then fast forward to the 94th minute and Kioso was given his marching orders by the referee for a second bookable offence.

Sunday’s Premier League games saw Matt Doherty, Dara O’Shea and Callum Robinson start for their respective teams Spurs and West Brom. Both games ended 1-1, with West Brom coming away from Anfield with a point after an excellent second half display.

A clean sheet and 90 minutes under the belt for Josh Cullen as Anderlecht defeated Beerschot 2-0.

After missing out on Burnley’s defeat to Leeds United on Sunday, Robbie Brady marked his return to action with an assist against Sheffield United in their 1-0 win. Moments after Brady’s inviting cross should’ve been converted by Chris Wood, the Irishman’s excellent delivery from a corner was met by captain Ben Mee who made no mistake with his finish.

At St. Mary’s Stadium, Danny Ings also returned to take Shane Long’s spot in Southampton’s starting eleven. Long was introduced just before the hour mark but neither striker could find a winning goal.

A heroic performance away to Liverpool was followed by a disastrous 5-0 defeat for West Brom at the hands of Leeds United. Dara O’Shea’s attempted block resulted in Leeds’s fourth of the evening as it deflected into the bottom corner. Whilst at the other end, one of Albion’s best chances was a wayward shot from Callum Robinson.

There were no shortage of Irish scorers in the Championship on Tuesday evening. Derby County’s 4-0 rout over Birmingham City means they climb to 20th in the league, three points above the relegation zone. The final goal of the night came from Jason Knight who neatly tucked away a cross at the back post. It was also a memorable night for Louie Watson who made his first senior appearance for the Rams, replacing Knight for the final minutes of the game.

Meanwhile at Deepdale, Sean Maguire inspired a Preston North End victory with a goal and an assist. His goal came from a scrappy affair in Coventry City’s box which resulted in Maguire poking the ball home. They all count!

Luton Town midfielder Glen Rea was also on the scoresheet as they beat Bristol City 2-1. Rea found himself in acres of space in the opposition box and spectacularly volleyed home a corner to give Luton the lead.

Despite an early goal from John-Joe O’Toole for Burton Albion, it was not enough as Wigan Athletic ran out eventual winners thanks to a late winner from Will Keane, his second goal in two games.

Veteran defender Alan Sheehan wrapped up the points for Northampton Town with his finish in their 3-1 win over Gillingham. Olamide Shodipo netted his fourth of the season from the penalty spot in Oxford United’s win over Plymouth Argyle.

Leyton Orient forward Conor Wilkinson scored his 7th of the season in their 2-0 win against Southend United.

Newcastle United vs Liverpool was the only game to be played on Wednesday evening after Spurs vs Fulham was postponed due to an outbreak of COVID-19 cases. And it was a hard-fought game for the Magpies who managed to keep out Liverpool’s attack and claim a well-deserved point.

Ciaran Clark’s header came close to snatching a late winner for Newcastle but heroic saves from both goalkeepers meant neither team could be separated.

Having impressed this season for Brentford’s B team, Ireland youth international Alex Gilbert was awarded a place on the bench for the senior team as they beat Bournemouth to move to second in the Championship table. A first team appearance may be on the horizon for Gilbert.

There were clean sheets for Danny McNamara at St. Johnstone and goalkeeper Danny Rogers of Kilmarnock in their respective fixtures, however the same could not be said for Conor McCarthy and co at St. Mirren who lost 2-0 to league leaders Rangers.

Any cookies that may not be particularly necessary for the website to function and is used specifically to collect user personal data via analytics, ads, other embedded contents are termed as non-necessary cookies. It is mandatory to procure user consent prior to running these cookies on your website.